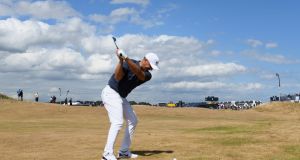 Alex Noren of Sweden plays his second shot on the 15th hole during Wednesday’s practice round for the 147th Open Championship at Carnoustie Golf Club. Photo: Harry How/Getty Images

Fittingly it was Pádraig Harrington, the winner the last time Carnoustie hosted the Open in 2007, who best summed up the challenge in trying to identify who will hold the Claret Jug aloft on Sunday.

“I’m not sure if this is going to be the toughest Open ever or the easiest Open,” said Harrington, who defeated Sergio Garcia in a play-off 11 years ago and then defended the title at Royal Birkdale the following year.

The reason for Harrington’s dilemma is the unusual state of the course, which is playing so hard and fast that the three-time major winner drove into the Barry Burn in front of the 18th green in practice — and he was far from alone in reporting prestigious feats of distance.

That brings bunkers which may not usually be in play into the equation and as world number two Justin Thomas admitted, the bunkers at Carnoustie are “truly a water hazard. You can never hit it on the green from them.”

However, the greens themselves have been watered and are currently receptive, leading to the possibility — as at Gullane for last week’s Scottish Open — of a host of low scores, highlighted by Brandon Stone’s closing round of 60 which gave the talented South African a place in the Carnoustie field.

It all seemingly adds up to a choice between a conservative strategy and a more attacking approach, with the likes of Rory McIlroy and Jon Rahm taking their chances off the tee in the knowledge that the heatwave has also burned off some of the usually thick rough.

“I guess the risk of hitting driver on a few holes is not having full control of your golf ball if it does run into the rough,” McIlroy, the 2014 winner, said.

“But the amount of gorse bushes that they’ve taken away from this golf course since 2007 [means] you’ve still got another five to 10 yards either side of the fairway where it’s okay.

“I think with links golf you have to adapt. I think there’s not going to be one player in this field that has a game plan on Wednesday night and is going to stick to that game plan the whole way around for 72 holes.

“The golf course is playing so firm and fast there’s some guys that will see it completely different than the way I see it. It’s going to be really interesting to see how it all plays out.”

McIlroy is approaching a fourth year without a major title, his last victory coming in the 2014 US PGA, a month after he won the Open at Royal Liverpool.

And although he has finished fifth and fourth the last two years, the 29-year-old could face a tough task to end the overseas dominance of golf’s biggest prizes, with American players holding the four major titles and teams from the United States in possession of all the transatlantic team trophies.

Jordan Spieth’s last victory was his triumph at Royal Birkdale 12 months ago, but the likes of world number one Dustin Johnson, Masters champion Patrick Reed and double US Open winner Brooks Koepka are part of a strong American challenge at Carnoustie.

And throw a certain Tiger Woods into the mix, in conditions reminiscent of his last Open victory at Hoylake in 2006, and Sunday’s winner will truly have earned the title of “Champion Golfer of the Year.”

Follow all of the action on our British Open liveblog from 8am Thursday morning and through all four days.