With all the will of the world, Tiger could not come roaring back

Woods played golf from heaven on last day of Open, but fell back to earth on the back nine 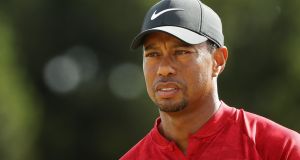 Tiger Woods of the United States walks off the 13th green during the final round of the 147th Open Championship at Carnoustie. Photograph: François Nel/Getty Images

Rewriting history is damnably difficult and Tiger Woods could not quite keep his hand on a quivering pen here. There was an echo of Muhammad Ali’s autumn days about the closing of the 147th Open as the gallery and the sport willed their hero on towards deeds that, ultimately, he was unable to deliver.

For nine holes Woods played golf from heaven. He briefly led on his own, even, for the first time in seven years. He and millions of others dreamed of him winning a 15th major, his first in a decade, but a mid-round collapse did for Woods, decked with his hands almost on the title. In the end, he could do no more than watch as his designated sparring partner, Francesco Molinari, became the first Italian to win the Claret Jug.

Perhaps we had no right to demand more from Woods in his return here after three years and four back operations, and his 71 for 279, three behind the winner, was not bad in this company and these circumstances.

Woods craved a statement to frighten the field, but missed a long birdie on the 1st. On the 461-yard 2nd, he got length and accuracy off the tee again but misjudged the speed and angle of his birdie attempt from 15 feet.

With the defending champion Jordan Spieth two groups behind and four shots clear alongside Xander Schauffele, Woods needed to make the most of every scoring chance on the easier front nine. An 18mph breeze blew over his right shoulder as he hit out of light, matted grass on the right of the 3rd’s fairway, clearing the burn with yards to spare rather than attacking the short-placed pin. His putt bobbled and he made par.

He took his driver out on the 415-yard 4th, finding a decent lie past the dog-leg, from where a 134-yard shot gave him his fourth birdie chance – and this time he nailed it, from 15 feet. A statement at last: three behind Spieth and Schauffele, and the only player under par to that point among the serious contenders. Now he looked a threat.

His driving remained deadly straight, safely short of the ditch that crossed the fairway at 280 yards on the 5th. His ball rolled away from the hole into a minor valley and he made par again when he could have had more.

Back with the driver on the 580-yard 6th, he negotiated bunkers on the right and joined a select group to reach the green in two – into a swelling breeze – 94 feet from the pin across undulating and left-turning grass for eagle. He was glad of the birdie and briefly alone at seven-under, now a single shot behind Spieth and Schauffele, both of whom gave one back on 5.

It was nearly two hours before Woods made a genuine mistake, finding a bunker on the 410-yard 7th but, from a friendly lie, he popped his shot to within four feet and saved. He got out of another bunker on 9 to hold steady.

Woods was firmly in a world of his own – and tied with Schauffele in the lead, as Spieth suffered. After 10 years, we were back in Tiger business. As Darren Clarke remarked, “At his best, he bores the golf course to death.” But this was anything but boring. Nine holes from home, he had lit up not just Carnoustie but the whole of golf.

The wind faded and Woods turned for home as the sentimental and logical favourite as his rivals began to sweat and stumble. He did not strike it so sweetly off the tee on 10, however, and needed an extraordinary shot out of a bunker to reach the edge of the green, an escape that will stay on highlight reels for years to come.

It is a measure of his dominance that the excellence of his playing partner Molinari was almost invisible to the lively gallery. That was about to change. Woods found hay on the right of the 382-yard 11th and, hitting into a 19mph wind, thrashed it into some ugly rough at the back after bouncing off a spectator, misjudged a difficult chip and three-putted to slip back to five under. With only a couple of easy holes left and the hardest treble in golf to finish, it was Tiger’s turn to sweat. When he bogeyed the 12th, it was as if someone had stolen a child’s Christmas present.

A missed birdie at 13 left him two behind the leaders. The quiet consistency of Molinari was the centre-pin of the group as he logged his 13th successive par. On the 14th, which had given up 54 birdies, the Italian went long and straight, the American long and left. Desperate, Woods chipped high from distance on the green, falling way short, then birdied with a bobbling, nerve-shredding putt to stay in the fight.

The 15th, 16th and the dreaded 17th passed without incident – then he missed an easy birdie on the last, which summed up his day. He gave Molinari a hug for his winning birdie, and the story was told.