Thurles, Rosslare and Naas advance to national final at the K Club 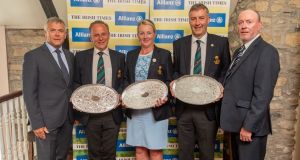 There was a time when Mount Juliet was the centre of the golfing universe, back when Tiger Woods prowled its fairways with aplomb.

For those competing in the Allianz Irish Times Officers’ Challenge qualifier on the Jack Nicklaus signature design, and following in the footsteps of legends, the road to success proved to be a tough examination . . . . and, in one case, that test involved simply navigating a route to Thomastown to make their tee time!

The trouble for those navigators from Rosslare Golf Club started on leaving New Ross to cross over the county border from Wexford into Kilkenny. With a lengthy traffic jam caused by road works, the intrepid team members – Jim Cullimore, Norrie Goff and Carol O’Brien – thought it best to inveigle the aid the Google Maps to find an alternate route.

It brought them to places they’d never have seen, the sense of adventure hardly appreciated as the clock ticked down towards the designated place on the timesheet.

“We were driving down narrow roads which had grass growing in the middle, it turned out to be a tour of Kilkenny,” said Cullimore of the offbeat journey that, nevertheless, saw them make it to Mount Juliet in the nick of time.

Well, let’s just say they didn’t win; but they didn’t lose either. Indeed, all those who played the course – where Woods won a World Golf Championship title in 2002 and Ernie Els won the same tournament on its return in 2004 – were winners.

On a beautifully sunny day, with the grasses on the fairways and mounds transformed from green to that brownish hue more associated with links terrain, it was the team from Thurles – Joe Kerrigan (12), Marian Finn (7)and David Crowley (6) – who ventured into Cats’ hurling territory to claim the honours with a fine score of 82 points (two from three counting on each hole).

Thurles – starting on the 10th, with a two-tee start in operation – got off to a flying start with seven pointers on the 12th and 13th. Kerrigan was the man with the hot putter, sinking birdie putts from 10 feet and 12 feet back-to-back. On the 17th, Crowley got in on the birdie train with a downhill 20-footer and, then, on the Par 3 third Finn – a daughter of three time All-Ireland hurling winner Jimmy – hit her tee-shot to four feet and rolled in her birdie putt.

With 43 points accumulated on their front nine, the additional 39 points on their homeward run was more than sufficient to earn them the pennant and a place in the national final at The K Club in September.

Thurles may have topped the qualifying in some style, but Rosslare’s highways and byways route to Mount Juliet also proved to be worth every bit of data used up on their mobiles.

The Rosslare team of Cullimore (7), Goff (16) and O’Brien (17) got off to a slow start – managing just three points on their opening hole – but played very steadily from there on to register a team score of 78 points to claim the runner-up spot to also book a place to The K Club.

The third and final qualifying place was secured by Naas Golf Club, with Jim Stapleton (6), Fionnuala O’Neill (22) and Gert Conway (23) combining well for a team score of 77 points which earned them the short trip to Straffan for the final.