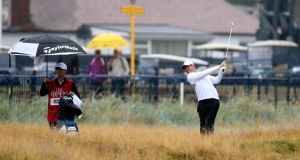 Rory McIlroy plays from the rough during the second round of the British Open at Carnoustie. Photo: Will Oliver/EPA 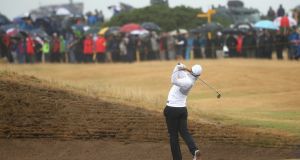 Rory McIlroy was forced to abandon his policy of over-powering the course but, in thinking on his feet to adopt a more conservative strategy, another round of 69 – for a midway total of four-under-par 138 – moved the world number eight ominously into contention in the 147th British Open at Carnoustie.

Although Zach Johnson birdied the last for a 67 for 136 to take the clubhouse lead as long overdue rain fed the thirst of the parched links, the 29-year-old Northern Irishman – seeking a fifth career Major title and first since his US PGA success in 2014 – put himself into a prime position to attack going into the weekend’s final two rounds.

A pre-championship game-plan to be aggressive off the tee was muted by the arrival of rain and a coldish front which brought bunkers into play, yet his mindset was such that he simply carried on with a revised plan – taking more irons off the tee and confining the driver to just six outings – that reaped dividends with four birdies and two bogeys.

As impressive in some ways was his capacity to save pars when in any trouble. A prime example came on the 17th hole – part of a tough finishing stretch – where his pushed tee shot narrowly missed the Barry Burn down the right, bouncing over it, and then his recovery from thick rough again avoided the meandering drain. Some 30 yards short of the green, he hit lob wedge to eight feet and his putter did the rest.

“Under those conditions, I would have taken that score today going out. It was just damp enough and cold enough that the game plan that I was trying to adapt to be aggressive and hit driver a lot, I just couldn’t do it. All the bunkers were in play. And then with it being wet, with the ball being wet and the club face, the possibility of that getting wet, (then) the spin rate goes right on the driver, and it could start to go either way,” explained McIlroy.

Either way, it seems, McIlroy was accepting of the changed conditions and certainly managed to keep his patience.

“Hopefully, I can go out and play well again tomorrow, and then that will be a big chance going into Sunday,” said McIlroy.