Adare Manor's golf course - as fine as any on the planet 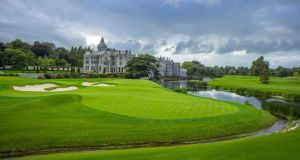 To start with there was no blank canvas; the picture had already been painted. A golfing masterpiece existed on the 842 acres through which the river Maigue’s pure waters flow at Adare Manor. Imagine getting a painting by Rembrandt or Monet and then improving on it – for that is what has happened after the original course design was fashioned into a work of genius by legendary course architect Tom Fazio.

Why change? Why indeed, and JP McManus – the resort owner – smiles at how the process of change started out as a plan to tinker with some bunkering and grew into a grand plan that has resulted in a pristine course of parkland perfection, the conditioning of which has drawn comparisons with Augusta National .

“The Robert Trent Jones course was a wonderful course, I have to say. But there were a few minor modifications I thought maybe should take place, like bunkers that were in positions I always seemed to be going into and I didn’t think they caught out any other players. I thought maybe we might excavate a few of them out of it, or cover them in, or do something,” says McManus.

One word then seemed to lead to another. And those words were to players who knew their golfing art. Mark O’Meara. Pádraig Harrington. Paul McGinley. The upshot was that Fazio – an acclaimed architect who had designed courses at the luxury Sandy Lane resort in Barbados owned by McManus and Dermot Desmond – travelled over to share a coffee and have a chat with McManus.

That initial meeting focused on bunkering and minor changes, no thoughts of any major revamp. “Move a few bunkers, some drainage to do; that was kind of the level of the conversation,” recalls Fazio.

But, of course, things changed. Fazio and his associate Tom Marzolf walked the course and gave some ideas of their own back to McManus. Both Harrington and McGinley, in their own ways, fed the fuel to create something special.

“It went in stages,” admits McManus of how the project grew legs, “and we got to the stage where we would try to do the best job that we could. We started moving greens slightly to let more light in, and then suggesting maybe we should get the SubAir in, and the more I was hearing the more it was growing on me, and I just wanted it to work. For me it happened almost by accident. I didn’t have a great vision. We ended up with a product I am very happy with.”

It is quite a special end product: the green complexes are the first in Europe to feature super-fine bentgrass (12,500sq m of putting surfaces in total), and it is the first course in Ireland to incorporate the SubAir aeration system used to remove moisture through vacuum pumps guaranteeing firm greens. While the course features little in the way of heavy rough, the lack of such a penalty only serves to add to its aesthetics.

One aspect that is immediately apparent is the amount of light which is now projected across the golfing landscape. Some 4,000 trees – or, as Fazio puts it, “trees, limbs, small twigs” – were removed as part of the permit approval process (all replaced by new trees in other parts of the estate) while the wildlife corridors were maintained.

During the construction truckloads of sand were brought in – 220,000 tonnes in total on the 170 acres which makes up the golf course – and laid to a depth of 12in on the greens and to 9in on the fairways. Some 77,000 linear metres of gravel trenches and perforated pipes to allow for free-draining were used in the construction.

Financial resources and hard work combined to produce a course of stunning beauty. The construction contract was awarded to Ballybunion-based Atlantic Golf Construction, and at the height of the project the company had 150 specialist operatives on site.

The Golf Course at Adare Manor – to give it the official title – is a parkland course unlike any other in Europe, with roll-offs and green complexes that are picture-perfect and set to pose a short-game examination to test players of all abilities.

This is a Fazio design that is unique in another way, featuring fewer bunkers than any of his other designs. Just 41 capillary concrete bunkers, filled with the finest Scottish sand, are on the course. A project that started out in McManus’s head to maybe tinker with a few bunkers grew into an undertaking that has resulted in a parkland course as fine as any on the planet.

“How many courses have I designed? A lot, I don’t keep count. I’ve been doing it a long time, so a lot......but I am so thrilled to be part of this. The only reason this whole facility is as good as it is starts from the top – the McManus family set the bar knowing it is going to be the best it can be,” says Fazio.

The proof is in his creation.

€350 – the green fee to play a round of golf at The Golf Course at Adare Manor.

41 – bunkers, the fewest of any Tom Fazio-design.

50 – the number of greenkeepers required to keep the course in condition.