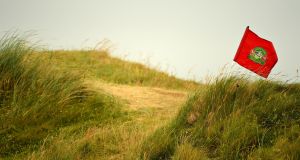 Hugh Foley carded an opening 64 in the first qualifying round for the South of Ireland Amateur Championship at Lahinch. Photograph: Ross Kinnaird/Getty Images

A little inspiration goes a long way and Royal Dublin’s Hugh Foley admitted that caddying for the winner of the North motivated him to card an opening 64 in the first qualifying round for the Pierse Motors VW-sponsored South of Ireland Amateur Championship at Lahinch.

The 22-year-old Dubliner shares a coach with Chelmsford’s Arron Edwards-Hill and after missing the cut at Portstewart, he took the bag for his friend and saw him cruise to victory.

It was similar plain sailing for Foley on Wednesday, as he got the best of the early conditions and made eight birdies in the in the lowest round of his career to lead by two shots from Rosslare’s Paul Murphy.

“I’ve never gone past the second round here but it’s the best round I’ve shot anywhere, recreationally or competitively,” said Foley, a full-time golfer, whose previous best was a 66 as an amateur entrant on the Evolve Pro Tour in Spain over the winter.

“It was great. I was feeling a little ill this morning and I was distracted about that and not thinking about my score.

“I am working with Geoff Loughrey in Roganstown and as he also works with Arron, I caddied for him for the whole matchplay in the North after missing the cut and he made it look easy.”

The five Irish players named in the initial Walker Cup squad earlier this year were given byes into Friday's matchplay draw.

But Foley is determined to lead the 59 qualifiers on Thursday before he has to deal with the likes of Amateur champion James Sugrue from Mallow, Kilkenny’s Mark Power, Portmarnock’s Conor Purcell, Kinsale’s John Murphy or the title holder, Caolan Rafferty from Dundalk.

“I drove it well and putted well,” said Foley, who hit 16 greens in regulation. “It was stress-free.

“I had a lucky break. I was out at half nine and it was only a one-club wind most of the day.”

Foley two-putted for his birdie at the Klondyke, hit an eight iron to 10 feet at the Dell and tapped in from three feet for another two at the eighth to go out in 33.

A 25-footer at the 11th gave him his third two of the day and after hitting a seven iron stone dead at the 14th, he made an eight footer for his sixth birdie at the 15th before making finishing two birdie for a homeward 31.

Douglas’ Peter O’Keeffe, who lost to Edwards-Hill in the final of the North, posted a 68 to share seventh place while two-time runner-up. Hermitage’s Rowan Lester, was joint 13th after a 70.