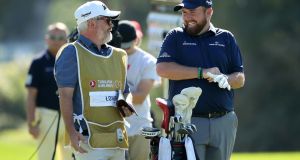 Shane Lowry of Ireland and his caddie Bo Martin during day one of the Turkish Airlines Open at The Montgomerie Maxx Royal. Photograph: Jan Kruger/Getty Images

One of those days. Shane Lowry couldn’t buy a putt. If they were giving them away for free, he’d have found a way to miss out. “I literally couldn’t get the ball in the hole from three feet,” Lowry remarked after an opening round 72, level par, in the Turkish Airlines Open at Montgomerie Maxx Royal that had him languishing in the wrong part of the leaderboard.

With the European Tour’s Race to Dubai moving towards the end game, Lowry - third on the order of merit - at least has three more rounds here, with no cut in the limited field tournament, to rectify matters. To do so, the putter will need to warm up; and, indeed, the player and caddie Brian “Bo” Martin headed to the putting green post-round to try and find some feel for the task ahead. “I just want to get it out of my system,” he said.

The irony of Lowry’s score of 72 to the 67 complied by Justin Rose, one of his playing partners, along with Race to Dubai leader Bernd Wiesberger, wasn’t lost on him.

A case in point came on the Par 4 17th hole, where Rose badly pulled his tee-shot into the overseeded rough. His ball barely visible, and with two pine trees in directly in his path, the Englishman contrived to get his ball to come up six feet short of the flag. Lowry, from the middle of the fairway, hit his approach to 12 feet and, in a tale of his day, missed the putt.

Of that approach shot, Rose said, “I had to just sort of control my flight, really, and over the first tree, under the next tree. It was one of those sort of shots and I judged it perfectly, exactly as Lordy (caddie Gareth Lord) and I drew it up, (to) try to pitch it up to the top of the upslope, trying to roll the ball up to the pin and that’s exactly what happened.”

Before Rose - who would birdie his closing three holes - Lowry had remarked to his own caddie Martin, “he’s going to hole it, isn’t he?” The observation wasn’t so much about Rose’s powers of escapology as Lowry’s own frustration with the putter on a day when he failed to get any smooth rhythm or roll on the greens.

Lowry was philosophical about it. “We were nip and tuck all day and he’s beaten me by five. It’s a funny old game. I was hitting fairways, hitting greens, hitting the ball well. It is what it is.”

The killer for Lowry was a frustration with the greens that stayed right to the end, in a round which featured one birdie - on the first - and a lone bogey, on the 13th.

“I barely missed a three-footer all year and I missed three of them in quick succession today. It is what it is. What can I do? I just have to go out tomorrow and do better. The greens are not great and being last off wasn’t a good draw today. I just lost confidence,” said Lowry.

Lowry’s woes started as early as the second hole where he missed a three foot birdie putt. “It kind of shocked me, it was like ‘wow’. I mean, it didn’t even hit the hole. I haven’t hit a putt like that since I can’t remember when.”

To rub salt into the wound, the same thing happened with another short birdie putt on the fourth. “From there on, I couldn’t get the ball in the hole all day. I probably had between 34 and 37 putts. It’s just frustrating because the last couple of weeks, I haven’t hit the ball as well as I would have liked. I went out there and hit the ball lovely,” said Lowry, who also saw order of merit leader Wiesberger recover to sign for an opening 71.

Lowry’s level par 72 left him in tied-52nd at day’s end, seven shots behind co-leaders Mathias Schwab and Tom Lewis. Nobody needed to tell Lowry that his round didn’t add up.

“It’s easy out there. There’s no wind. The greens are soft. It is just so easy. You should be making six birdies at least out there today and I didn’t. As the day goes on, the more frustrating it gets. I’ve three days but the last thing I want is to be fighting in the middle of the pack. Ideally, I’d like to go out there and shoot a decent on (Friday) to give myself a chance of a good week, because the scoring is going to be good. It’s probably going to take 20-under to win this week.”