Shane Lowry has Tokyo 2020 Olympics firmly in his sights 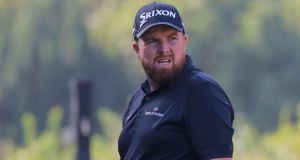 Shane Lowry is set for his penultimate start of a fine year in this week’s Turkish Airlines Open. Photograph: Wu Hong/EPA

Shane Lowry’s vision is firmly focused on matters at hand, but also further away. As he heads into this Turkish Airlines Open on the Montgomerie Course at Maxx Royal resort on the Mediterranean coast, with only the season-ending DP World Tour afterwards left on his schedule, there is also the matter of next year’s Olympics easing into his sightline.

In fact, Lowry has already booked his flight tickets to Tokyo. “I am not 100 percent on the team but I have my flights booked for the Wednesday after The Open,” he said, in the knowledge that it would take some sort of perfect storm to deprive him of a place on the Ireland team, with Rory McIlroy also a shoo-in.

So, the question. Has the thought of carrying the Irish flag at the opening ceremony crossed his mind? “I wouldn’t say ‘no’. Everybody knows how patriotic and Irish I am but, look, there is obviously going to be other athletes there who will be putting their name forward I am sure. Wouldn’t it be an incredible honour for myself and my family to do something like that? So, yes.” If asked!

Having missed the Olympics in Rio de Janeiro in 2016, Lowry is intent on making it to next year’s Games at which stage all four Majors of 2020 will be a done deal, finishing with his defence of the Claret Jug at Sandwich.

“In golf, people play 25, 30 times a year and every week is a big week in its own right. Obviously we have our four Majors and people see them as the top level in golf. I have said it, maybe in 20 years time the Olympics will be on that level and right now people need to get their head around it first.

One of those big weeks for Lowry, in what already has been a magnificent season with his first Rolex Series title in Abu Dhabi stunningly backed up with his British Open win at Royal Portrush in July, comes his way here in the Turkish Airlines Open with a €1 million winner’s prize and a huge number of Race to Dubai points on offer.

Lowry is third in the Race To Dubai order of merit standings and has opted to focus on playing Turkey, missing out on next week’s Nedbank Challenge in Sun City, and then finishing his year’s work in Dubai.

“If I was full on and gungho winning the Race to Dubai I probably should be going to South Africa. I just feel I might not perform as best as I can in Dubai if I do that. I am just giving myself the best opportunity to try and play well this week and in Dubai.

“The year I have had, I played some great golf along the way, with a couple of bad weeks in there as well, but that is the way golf is and that is the way I am. I have accepted the bad golf very well this year and I have done well when I got my opportunities. I will go out and try and shoot the best score I can.”