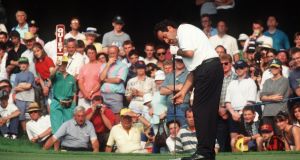 The so-called “Links Swing” on the PGA European Tour has proven to be a short-lived initiative of just three years, with next year’s staging of the Dubai Duty Free Irish Open returning to a parkland venue: Mount Juliet resort in Co Kilkenny will play host to the tournament, which has been brought forward to a May 28th-31st date.

Designed by legendary American golfer Jack Nicklaus, Mount Juliet last hosted the tournament from 1993 to 1995 while it also host the WGC-American Express Championship on two occasions, in 2002 and again in 2004.

For the past three years, the DDF Irish Open has been part of a three-week links schedule along with the Scottish Open and the British Open on the European Tour but that was thrown out of kilter for 2020 after the PGA Tour decided to bring forward the WGC-St Jude tournament (due to complications with scheduling in an Olympic year), which would have clashed directly with the Irish Open’s July date of recent years.

In avoiding a clash with that WGC tournament stateside, the decision was taken to move the Irish Open forward to a May time slot in the calendar. Mount Juliet threw its hat into the ring at an early stage and, 25 years on from Sam Torrance lifting the trophy at the Thomastown estate, it will again welcome a top class field where Jon Rahm will defend his title.

Rory McIlroy, who missed this year’s tournament at Lahinch as part of his scheduling ahead of the 148th British Open at Royal Portrush, a decision which backfired when he missed the cut on the Causeway Coast, has already committed to playing next year while, of course, Claret Jug holder Shane Lowry will also be competing.

The tournament will remain as part of the elite Rolex Series of events. Colm McLouhglin, the executive vice-chairman and CEO of Dubai Duty Free, said: “We are pleased with the growth of the tournament since Dubai Duty Free became involved in 2015 and the fact that it is now part of the Rolex Series with a prize fund of $7 million. We also agree with the strategy, which both the European Tour and the previous hosts, Rory McIlroy and Paul McGinley, have employed of moving the tournament around the island of Ireland to include north and south, links and parkland, (which) has been very successful.”

The K Club in 2016 - where McIlroy won - was the last parkland course to host the tournament. Since then, as part of that links swing, it has been played at Portstewart, Ballyliffin and Lahinch.