Justin Rose bidding for a hat-trick of wins in Turkey 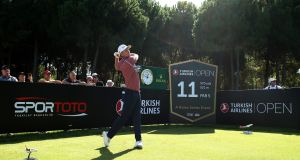 Justin Rose in action during a practice round ahead of the Turkish Airlines Open at The Montgomerie Maxx Royal in Antalya, Turkey. Photograph: Jan Kruger/Getty Images

Even for Justin Rose, a player who has tasted Major success – in the US Open – and as an Olympic gold medalist, this is unchartered territory.

The Englishman, ranked eighth in the world, will attempt to reel off a third straight Turkish Airlines Open title when he defends the championship on the Maxx Royal Montgomerie Course in Antalya.

Only Ian Woosnam (Monte Carlo Open 1990-1992), Nick Faldo (Irish Open 1991-1993) and Colin Montgomerie (BMW PGA Championship) have won a tournament in three successive years on the European Tour, although Tiger Woods – technically – is also part of that elite club in that he won back-to-back-to-back WGC-Bridgestone Invitationals on two occasions, firstly in a run from 1999-2001 and again from 2005-2007.

Whichever way you look at it, it is heady company and a difficult ask. And Rose – winner of this TAO for the past two years, when it was played at Regnum Carya – has the opportunity to complete a hat-trick of titles here.

“Winning the Major championships, winning big tournaments, that’s where you really have to absorb the pressure. You get asked the most questions of yourself when you are trying to win those tournaments that you’ve dreamed about as a kid.

“I think a three-peat, so to speak, is something that sneaks up on you. Obviously, now, the third time, the pressure becomes a little more because it becomes a bit more than just the tournament itself. You’re trying to achieve something for the first time.

“To rank it is very hard to do. It’s one of those little asterisk moments in your career, where you actually did win three tournaments in a row . . . . (but) you’re not equaling it to another huge championship win possibly,” said Rose, who is in search of his first win since the Farmers Insurance Open on the PGA Tour back in January.

For Rose, the one “unknown factor” as he put it this time around is the change of venue for this latest instalment of the tournament.

“You win back-to-back on a certain golf course, you would rather maybe it was the same venue. But definitely there is something in the water for me here [in Turkey]. I think it’s the weather, the style of golf is really nice. You’d liken it to Sotogrande, or Valderrama, tree-lined, really fun golf. We shall see.”