Out of Bounds: Mount Juliet hosting the Irish Open allows a throwback to Woods’ dominance 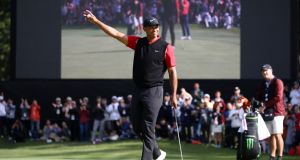 In this week of all weeks, with Tiger Woods again confounding us and proving that he can never be written off, and with confirmation that Mount Juliet will play host to next year’s DDF Irish Open, let’s throw ourselves back into the past and a time when nobody questioned his greatness.

The year was 2002 and the scene was indeed Mount Juliet. The tournament was the WGC-American Express Championship – nowadays rebranded as the WGC-Mexico Championship – which was played the week before the rescheduled Ryder Cup match at The Belfry and Woods put on a masterclass that saw him go 71 holes without a bogey.

Back then, Woods was supreme and his dominance was unquestioned. His only display of human frailty that week came on the 72nd hole and, even then, the finger of blame for a closing bogey could be laid elsewhere as his focus was undone by the sound of a photographer snapping away too early.

As Woods himself put it afterwards, “One of the photographers just took a picture while I’m over the ball. The most important shot of the day and he gets a happy finger . . . . I was so hot, because of all the times for him to take a photo. I’m 236 yards out, I’m trying to hit a 4-iron there, and it’s not exactly an easy shot. I was just hot (annoyed).”

That sense of grievance gave us an insight in Wood’s competitiveness, for it was the only blip on a near-perfect display of brilliance: his winning total that week was all of 25-under-par as he made the Jack Nicklaus-designed course his own domain.

The so-called “Ws” – wins – came thick and fast back in those days and the victory in Mount Juliet was one of five that year. Fast forward now to his latest W, the success in the Zozo Championship in Japan this week and Woods’s achievement in matching Sam Snead’s record of 82 tournament wins on the PGA Tour.

In golf, it is all about the numbers. And Woods has crunched them better than anyone in his career: while matching Snead’s 82 PGA Tour wins caught the headlines, his impact as a global player – the one who moves the dial more than anyone else – is showcased in that his Japanese win was his 108th career win worldwide. It brought to 12 the number of different countries in which he has won (Australia, Canada, England, Germany, Ireland, Japan, Malaysia, Scotland, Spain, Thailand, UAE and USA).

The one numbers game Woods is playing catch-up on is in chasing down Nicklaus’s record 18 Major wins. Woods brought his own total of Majors up to 15 with his success at the Masters tournament back in April; and, if his form in the subsequent Majors of the year and his poor health in that period may have had us doubting if that pursuit of the Golden Bear’s record was still viable, the win in Japan – even more than the success in Augusta – tells us never to write him off.