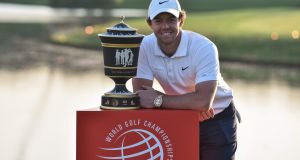 Rory McIlroy poses with his trophy after winning the WGC-HSBC Champions tournament in Shanghai. Photograph: Hector Retamal/AFP via Getty Images.

The nuts and bolts of it all is that Rory McIlroy’s fourth win of the season – adding the HSBC Champions to The Players, the Canadian Open and the Tour Championship on the PGA Tour – means that the 30-year-old Northern Irishman has moved ever closer to world number one Brooks Koepka in the official rankings.

Koepka, currently recovering from injury, is now just a 1.1 points average ahead of McIlroy in the updated rankings. To put some perspective on that gap, Koepka’s lead at the start of this year was 3.29 points average.

What is perhaps most reassuring for McIlroy about his upward trending is that his win in Shanghai confirms that nobody, through the year, has played better golf than him in 2019: McIlroy has amassed 480 world ranking points so far, with Koepka’s 380 the next best. Only two other players, Justin Thomas (302) and Dustin Johnson (301) broke through the 300 points barrier.

McIlroy – with only the European Tour season-ending DP World Tour Championship later this month left on his schedule – may have to wait until next year to overtake Koepka but all the signs are that it will be only a matter of time on his current form path: in 24 appearances this season, he has won four times and finished in the top-5 on 11 occasions and had 18 top-10s. Outside of the Majors, this has been his most consistent season.

In bypassing this week’s Turkish Airlines Open and next week’s Nedbank Challenge in Sun City, McIlroy – up to fifth in the Race to Dubai standings – has made adding the European Tour order of merit to his FedEx Cup title a more difficult task. But still doable, if he wins in Dubai and those ahead of him all falter.

What is more attainable for McIlroy is reclaiming that number one spot from Koepka in the early part of next year and the HSBC win – in a playoff with Xander Schauffele – has edged him closer to that goal.

“I just wanted to play well until the end of the year and give myself a platform going into 2020 . . . even though it’s the end of the year, there’s a lot to play for. At least there is for me, anyway. You need to find things to motivate you and those are the thing that motivated me to travel to Asia and play hard the last couple of weeks. I’ve got one event left to play [in Dubai] to try and replicate that play that I’ve shown over the last two weeks,” said McIlroy after his latest win in China.

In terms of seasons with victories, McIlroy’s best win rate was back in 2012 when he won five times (including the US PGA) while he won four times in both 2014 and 2015. In 2014, those wins included two Majors (the British Open and the US PGA). This year’s successes included winning the PGA Tour’s flagship, The Players, and the megabucks Tour Championship to lift the FedEx Cup.

But his run since his last of four Majors has now extended to five years.

“I’m excited for the future. I feel like this year compares to 2014, 2015, but I don’t see any reason why I can’t go ahead and have an even better year next year!” said McIlroy, who plans on taking a two months winter break after playing in Dubai.