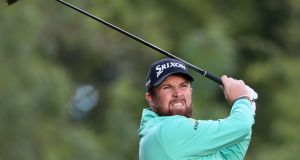 Shane Lowry: looking forward to a tournament in which he has traditionally excelled. Photograph: Brian Lawless/PA

Shane Lowry will return to European Tour action this weekend at the BMW PGA Championship at Wentworth.

He is one of three Irish players in the field, alongside Pádraig Harrington and Graeme McDowell, scheduled to compete in a tournament that forms part of the Rolex series, boasting a €7 million prize fund.

The 33-year-old British Open champion finished a nine-week stint on the PGA Tour by returning to play in the Dubai Duty Free Irish Open at Galgorm Castle, where he failed to make the cut, looking a little tired mentally from his schedule across the Atlantic. His first week back on the island was spent in the European Tour bubble at the tournament in Ballymena.

Lowry initially indicated that he planned to take some time off to spend with his family and that because he would have to restrict his movement in acknowledgement of Irish Government Coronavirus regulations if he was to travel to London and then return to Ireland, he considered not playing in the BMW PGA Championship as it would curtail a desire to catch up with friends and family over the fortnight following Wentworth.

Instead of playing in the Scottish Open at the Renaissance Club in North Berwick, he relaxed at home, putting the clubs to one side.

However in the climate that currently pertains in relation to Covid-19, restricted movement is very much the order of the day, so Lowry will tee it up in Wentworth and accept that on his return to Ireland he will be limited in what he can do, travel-wise, before heading back to America.

The tournament sponsors and European Tour will be delighted to have the Open champion in action. From a playing perspective, he is looking forward to a tournament in which he has traditionally excelled.

In the last seven years he has only once finished below a tie for 12th place, has three Top 10s and finished runner-up to Rory McIlroy in 2014, when he was rather unlucky with the final resting place of his tee shot on the 13t, a bush that cost him a couple of shots.

An outline plan at present is that Lowry’s first tournament on his return to America will be the Houston Open at Memorial Park golf course, the week before the US Masters at Augusta National (November 12th-15th).

European Ryder Cup captain Pádraig Harrington finished in a tie for ninth place (€107,867) at the Scottish Open, his first Top 10 on the European Tour for a couple of years. The 49-year-old produced a sterling performance over the weekend, having made the final 36-holes on the cut mark and courtesy of a superb sand save from a greenside trap on the 18th on Friday.

Harrington certainly subscribed to the maxim, ‘beware the injured golfer,’ putting up on social media a picture of him receiving post-round treatment to his knee and neck.

He explained: “I tweaked my neck before I went out and I struggled to hit the golf ball all day. I really struggled with my alignment because I couldn’t look up properly. So that put me off most of the day but I stuck in there and managed my way around the golf course and I putted quite well.

“I am really happy that I putted well because that has been pretty weak for a good few years so I saw some positive signs in my putting this week that I was very happy about. I would have liked to have been injury-free today to give it a good run but I probably got the most out of the round that I could have.

“There was pain when I swung the golf club but that didn’t bother me. When I was standing over the ball, I had to move my whole body rather than just my head so it freaked me out big time all day.”

A second round 74 saw Graeme McDowell miss the cut at the Scottish Open following another weekend off in the Dominican Republic the previous week, a tournament in which he was defending a title he won in 2019. The Northern Ireland golfer will hope that Wentworth – he has had several fine performances around the West course – gets his competitive juices flowing this week.

Meanwhile Sergio Garcia won the Sanderson Farms Championship, his first victory on the PGA Tour since the 2017 US Masters; perfect timing as the tour heads for Augusta National in November.

The Spaniard said: “Well, it’s obviously a boost of confidence, there’s no doubt. Every time you play well, even if I would have not won it, it still would have been a massive high for me this week.

“To be able to do a lot of the things that I did, it meant a lot. It showed me a lot of what I still have and what I still can do. It’s obviously exciting. I’m finally very happy with the equipment that I have in my bag, with everything that I’m playing. I feel like I’m starting to be the old me, being able to hit shots from every angle, and obviously it’s exciting.”

1 Ireland 23 Georgia 10: How the Irish players rated
2 Ireland grind their way to grisly win over Georgia
3 Jim McGuinness: There is a way to save championship and make it competitive
4 No fireworks but Limerick get the job done against Galway
5 Car sliced in half but Grosjean survives huge crash at Bahrain Grand Prix
Real news has value SUBSCRIBE

No fireworks but Limerick get the job done against Galway 19:49
Billy Burns provides silver lining to gloomy Ireland display 19:57
Ireland’s autumn of discontent continues with abysmal Georgia showing 19:24
Chelsea and Tottenham draw a blank at Stamford Bridge 19:04
Andy Farrell: Ireland’s Georgia showing was ‘not good enough’ 18:36
Here is your handy guide to sport on television this week