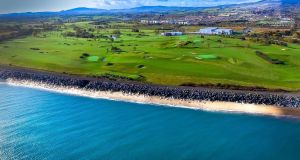 Charlesland Golf Club in Wicklow will close permanently on December 31st, the club’s owners, the Evans family, have announced.

The Eddie Hackett-designed course which overlooks the Irish Sea south of Greystones officially opened in 1992 and affiliated to the GUI and ILGU a year later. It was the brainchild of the three Evans brothers, Clive, Lance and Wilson, the land originally a family farm, belonging to their father, Lewis.

In 1999 the Evans family, who owns the land upon which it sits, leased the course to the club for an annual fee. Initially the cost of the lease was broadly commensurate with revenue generated from the annual membership, which at that time would have roughly equated to €400,000.

Nikki Evans on behalf of the club owners, the Evans family stated: “Despite significant investment, a restructure and success of Carr Golf to build membership, increase revenue and provide a high standard golf course, the facility still requires regular cash injections from the family. Coupled with an uncertain medium term outlook for golf, after long and careful considerations, we made the difficult decision to close.”

While offering a very competitive annual subscription of €1,400 with a Flexi-Pay option, the club lost a tranche of members to both Dún Laoghaire and Greystones over a period of time but did benefit from an influx of members when the Glen of the Downs golf club closed down.

The Evans family continued to invest heavily in course, clubhouse and facility improvements including a re-routing of some of the original layout. In 2014 Carr Golf were employed by the Evans’ family to maintain the golf course and manage club operations which they accomplished while generating increased membership, society and green fee traffic.

A Carr Golf spokesman said: “We appreciate the news to close Charlesland may come as a shock to members and the wider golf community. The management team has met with golf club staff and the Captains to explain the owner’s decision and communicated with members to inform them of the news. We will provide Club staff with support and assistance over the coming weeks and months.”

A member of the club explained: “I didn’t know this was coming but I am not surprised. It’s been a semi-regular topic of conversation over recent years and several things have been tried to boost revenue streams including converting the clubhouse into mini units, like a small gym, beauty salon, Cafe and yoga studio.”

Charlesland is the latest Irish golf club to close after Hollystown and Dunmurry Springs both shut their doors at the end of last year. After golf courses were forced to close in March due to the Covid-19 pandemic, Water Rock in Cork, founded in 1994, did not re-open, nor did Castle Barna in Offaly.

The Castleisland and Killorglin clubs in Kerry both closed down but an amalgamation of members from those clubs came together to create Maine Valley Members Club whose course is the original layout at Killorglin.

The Charlesland course, clubhouse and facilities will remain open for the remainder of 2020, facilitating casual golf and competitions for members while also continuing to offer green fees to visitors.

1 Jack Nicklaus’ Trump endorsement leads to avalanche of dismay
2 Return of Conor Murray’s box kicking could exploit French vulnerability
3 All-Ireland football championship 2020: Our writers’ and pundits’ predictions
4 World Handicap System: What is it? How does it work? Will my handicap change?
5 Owens denies reports of unrest among FAI staff
Real news has value SUBSCRIBE