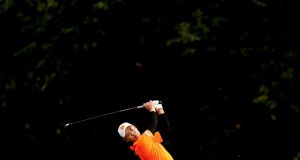 Orange is the new black

It’s not just American Rickie Fowler that likes to wear orange on a Sunday, a tradition that dates back to his time in college golf. As he has previously explained: “I started doing that while I was in school. Obviously not many guys wear orange, so it was a way to be my own man out there. A few of my Oklahoma State teammates wore the same colours, so at the time it was a bit of a bonding thing. But nobody really does it on tour. I like to think of it as my own little personal style.”

He’s got competition now though as Thailand’s Jazz Janewattananond, who finished in a tie for third at the DDF Irish Open at Galgorm Castle, also sports the colour orange on Sundays, albeit for a different reason. The 24-year-old was right in contention to win at the weekend before a double bogey on the 14th and a bogey on the 16th effectively scuppered his chances.

Janewattananond’s decision to wear orange in the final round of a tournament is to celebrate a two-week stint as a monk in a Buddhist temple. Having lost his Asian Tour card for the first time since 2013 he spent two weeks at the end of the 2016 season as a disciple of Phra Maha Vudhijaya Vajiramedhi in Chiang Rai, Bangkok, He shaved his head, spent a fortnight with the monks, devoting himself to chanting and prayer and just weeks after ending his spell there, won his first tournament on the Asian Tour.

He admitted: “I learned from him (Phra Maha Vudhijaya Vajiramedhi) that happiness is the greatest thing in life. Before that, golf was everything to me, and it gave me so much pressure during competition. I have been competing with less pressure ever since and starting getting better results.” He’s won six times on the Asia/Japan/Korea Tours.

He holds the distinction of being the youngest male to compete in an Official World Golf Ranking recognised event when doing so at 14-years-old before turning professional at 15 in 2010. His Buddhist experience prompted him to regularly donate some of his winnings to charities.

Janewattananond, was christened Atiwit, but owes his funky first name to his father’s love of jazz music and he’s even incorporated the name Jazz into the way that he signs autographs. He uses a music symbol instead of a J followed by a-z-z. The Thai heads for the Scottish Open this week at the Renaissance Club in North Berwick, one of the European Tour’s Rolex series events.

European Tour leaving nothing to chance

There’s no doubt that the European Tour is doing everything to try and ensure the safety of all those present at tournaments in the age of coronavirus and that includes the media. A prerequisite of attending the DDF Irish Open was that all media were sent a Covid-19 testing kit before the event, with which they were obliged to self-test and then sent back the swabs to be analysed. They also underwent a test when arriving at the venue.

The media had to stay in a designated European Tour hotel - no leaving the premises - and were not allowed to stop anywhere when travelling to and from the course. They were given a dining buddy and that was the only person they were permitted to sit with when eating. Masks had to be worn at all times and the two-metre rule was strictly observed in the media centre and during a strictly regulated interview process with the players.

September 29th, 2002: The Sunday singles in the Ryder Cup match at the Belfry belonged to Europe but the headlines to Ireland’s Paul McGinley, who secured the half point in his match against Jim Furyk to ensure that the home side regained the trophy. Colin Montgomerie, Bernhard Langer, Padraig Harrington, Thomas Bjorn and Philip Price all won their matches while Darren Clarke, Niclas Fasth, Pierre Fulke and Jesper Parnevik each won a half point apiece as they finished all square in their respective duels but it was the Dubliner to which the honour fell of guaranteeing a European victory.

The Ryder Cup had been postponed from the previous year following the September 9/11 attacks in New York. Sam Torrance’s European side would have been slight underdogs going into the singles given how strong America traditionally were in that discipline but they responded to a man virtually.

McGinley, who trailed from the second hole in his match, birdied the 17th to go all square playing the last. Both players missed the green in two, Furyk in the bunker, his opponent in the greenside rough. The American almost holed out from the sand leaving McGinley a 10-foot putt to earn a half, which he duly rolled in.

When he finished jumping up and down, and after being mobbed by his teammates, he jumped into the lake prompting one of the most iconic photographs in Irish sport, of a sodden McGinley holding the Tricolour aloft. He would go on to captain the European team at Gleneagles 12 years later.

@Graeme_McDowell: Disappointed to not make the cut and miss the weekend. It was great to be back here after winning last year and a big thank you to everybody at the @CoralesChamp Staying positive and now looking forward to next week @Scottish Open@EuropeanTour. Graeme McDowell withdrew as host of this year’s rescheduled Dubai Duty Free Irish Open at Galgorm Castle to defend the title he won in the Dominican Republic last year.

399,500: That’s what the 29-year-old American John Catlin has pocketed in winning two tournaments this month on the European Tour, The Andalucia Masters at Valderrama and last weekend the Dubai Duty Free Irish Open at Galgorm Castle. Had Catlin won the Irish Open last year he would have earned a cheque for just over €1 million, albeit that he would have faced a much stronger field.

Q: Player A played a stroke-play qualifying round for a match-play competition and after completing the round goes out to practice on the course. After the conclusion of play Player A is tied for the last qualifying place. The tie is to be decided by a hole-by-hole stroke-play playoff immediately after play on the same day on that course. What if any penalty does Player A face?