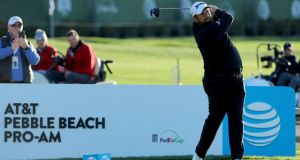 Shane Lowry plays his shot from the third tee during the final round of the AT&T Pebble Beach Pro-Am at Pebble Beach Golf Links on Sunday. Photograph: Warren Little/Getty Images

A deadline of sorts is looming for Shane Lowry, who would need a top-two finish at this week’s PGA Tour event, the Genesis Open at Riviera, if he is to make the field for the upcoming WGC-Mexico Championship: the first cut-off in determining the field for that no cut, megabucks tournament comes on February 19th.

Lowry – currently 69th in the world rankings – needs either a win in Los Angeles or a minimum of a two-way tie for second if he is to jump up the rankings to earn a spot in that WGC-Mexico championship where, as things stand, Paul Dunne could be the sole Irishman playing.

Rory McIlroy hasn’t included the event in Mexico on his schedule, one of a number of players (also including Jordan Spieth and Jason Day) who have opted to bypass the tournament in the run-up to the US Masters.

McIlroy, though, is playing in Riviera where he will attempt to get over the putting woes which afflicted him in missing the cut at the AT&T Pebble Beach Pro-Am. The Northern Irishman – who dropped from eighth to 10th in the latest world rankings – suffered especially in his second round where he used his putter no fewer than 38 times, including a four-putt from inside 10 feet at one point.

Any concern about his putting was, however, waved away by McIlroy, who admitted he had let the poa annua greens at Monterrey Peninsula “get into my head a little bit.” He explained: “I just need a few putts to fall . . . honestly, I’m fine. I have to learn to trust my lines. I have a little bit of work to do in that regard but I’m really looking forward to Riviera. I love that golf course and I expect better results.”

McIlroy’s schedule going forward will see him play the Genesis Open this week, followed by the Honda Classic next week before taking a week’s break and playing the Valspar Championship, the Arnold Palmer Invitational and the WGC-Dell Matchplay before he gets to Augusta.

There is a quartet of Irish players in the field for the Genesis, with Pádraig Harrington and Graeme McDowell – like McIlroy – seeking to rebound from missed cuts. Lowry’s recent run has shown week-on-week improvement, from a missed cut at the Farmers Insurance Open to a tied-65th at the Phoenix Open and a tied-43rd at the Pebble Beach where he disappointed in Sunday’s final round.

If Lowry doesn’t make it into the world’s top-50 after the Genesis Open, his next – and only other – chance will come after the Honda Classic, the first of the Florida Swing events, with the cut-off falling on February 26th.

Higgins, indeed, will be seeking a hat-trick of titles for the 36-hole championship’s return to the Ron Kirby-JB Carr-designed course which will feature a prize fund of €13,000 when it takes place on May 16th/17th.

“We were very happy with the profile the golf course and estate received from the inaugural tournament last year. A second year gives us an opportunity to once again engage with professionals from all over Ireland and to promote and develop the golf facility at Dromoland Golf & Country Club,” said Mark Nolan, managing director of Dromoland Castle, in confirming the deal.