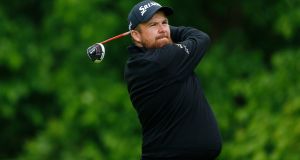 Ireland’s Shane Lowry drives from the seventh tee during the first round of the RBC Canadian Open at Hamilton Golf and Country Club. Photograph: Michael Reaves/Getty Images

Shane Lowry has chosen a good time of the season to click into gear, as the 32-year-old Offalyman – resuming tournament play after a two-week break – maintained his forward momentum to open with a fine six-under-par 64 in the RBC Canadian Open at Hamilton Golf Club in Ontario, to trail clubhouse leader Keegan Bradley by one stroke.

Lowry – coming off top-10 finishes in his last two outings, a tied-third at the Heritage Classic and a tied-eighth at the US PGA Championship – fired seven birdies and suffered a lone bogey.

“I pretty much hit the ball where I wanted to and holed a few putts, which was nice,” said Lowry, of a round which propelled him straight into contention.

Having fulfilled some corporate commitments in New York following the US PGA, Lowry – and family, who were based in Florida for the past four months – returned home to Dublin and, although he took in a trip to play Lahinch and Adare Manor, he confessed not knowing what game he would take with him out onto the course.

“I just went out there with little expectation, but just knew that I been playing okay recently,” said Lowry who hit the birdie trial with a seven-footer on the third and a great up-and-down from a greenside bunker on the fourth. His only bogey came on the seventh where his drive finished in a fairway divot and his approach shot spun back off the green.

Lowry only arrived into Ontario on Monday evening and he saw the funny side of failing to anticipate the bad weather in Wednesday’s pro-am. Completely unprepared for the heavy rain which fell, with no umbrella or waterproofs, Lowry ventured into the crowd and paid a woman $100 for an umbrella. “It leaked on me,” he laughed. Still, such preparation did no harm at all as he went about his business in a productive first round.

Graeme McDowell finished with back-to-back birdies to make a late jump up the leaderboard, the former US Open champion carding a five-under 65 to sit just two shots off leader Bradley.

Rory McIlroy, also seeking some tournament sharpness ahead of next week’s Major in California, opened with a three-under 67.

Having missed the cut in the Memorial last week, McIlroy said: “I felt like I could have gone a few lower, but that’s golf. I feel like it’s the highest score I could have shot out there. I played well. It’s definitely an improvement on how I played at the Memorial. A little bit of work that I did over the weekend and the start of this week has seemed to fit in quite nicely.”

With the rain of recent days softening the course, enabling players to fire at flags, Bradley’s bogey-free 63 enabled him to grab the clubhouse lead, a shot clear of a group that included Lowry, South Korea’s Sungjae Im and South African Erik van Rooyen. Séamus Power opened with a round of 70, while Pádraig Harrington signed for a 71.