Thinking of somewhere different for a golf trip? Try Turkey

Covering all the bases: southeastern corner of Europe offers alternative for a golf holiday 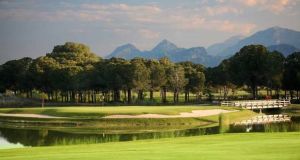 As the world gets smaller thanks to better air travel the potential destinations for all sorts of trips gets bigger. Golf holidays are no different. Previously the European destinations ranged from the Algarve to southern Spain and not much further but now you can pack the clubs and jet off to play spectacular courses anywhere in Europe from Iceland in the north west to Turkey in the south east.

While Spain and Portugal will always hold the upper hand in terms of speed of travel, Turkey is emerging as the destination that trumps all on price with Turkish Airlines now offering return flights to Antalya from Dublin.

The Turkish Airlines Open – one of the Rolex Series events on the European Tour – has been held at various courses on the Antalya coastline since 2013, kicking on from the success of the 2012 World Golf Final which saw Rory McIlroy and Tiger Woods tee it up in an exclusive eight-man field.

During the middle summer months the area can get particularly hot meaning outdoor activities – such as golf – are restricted. The ideal times to travel are autumn and spring although even during the winter the weather remains warm.

With over a dozen golf courses on a small stretch of southern Turkey coastline there is more than enough to choose from. Gloria Hotels and Resorts was our destination, specifically Gloria Serenity, although there is also Gloria Golf Resort and Gloria Verde to choose from on the same complex, all ranging in price. There are also three golf courses in the resort – the Old (par 72, 7,140 yards), the New (par 72, 7,133 yards) and the nine-hole Verde (par 35, 3,244 yards) – meaning there are 45 holes to play during your trip with the Old Course generally playing as the most difficult.

Gloria is about a 40 minute transfer from Antalya Airport and is located just outside the old medieval town of Belek which offers an antidote to the resort if you start to feel some cabin fever. The town is a 10-minute drive from the resort but alternatively you can hire a bike at the hotel and cycle in via the main road. There is extensive shopping on offer in the town as well as beaches and thermal spas.

A break from the golf may indeed be very welcome as the three courses present a significant challenge, although various different tee boxes mean they can play quite a bit shorter than their full length. Tall trees line the fairways with the Old Course playing particularly tight off the tee while the classic resort course hazards of huge man-made lakes come into play on the majority of holes. Not that those challenges bothered Old Course record holder and two-time Major winner John Daly who shot a 63 some years ago despite the fact that, according to some tales, he had made the most of the numerous bars around the resort the night before.

After the golf, cycling or a long day of relaxing there is plenty to choose from when it comes to dinner with six restaurants ranging from traditional Turkish cuisine to a steakhouse, Japanese food and more. Most of the all-inclusive deals which the hotel offers include one dinner in any of the restaurants while guests can eat as many times as they like at the extensive buffet. As a pointer, the Sha Japanese restaurant in the Serenity part of the resort was a particular highlight.

If golf isn’t your thing or perhaps you just want a break after realising you probably won’t break John Daly’s course record you can choose from windsurfing and other activities at the private beach, outdoor pools, a small waterpark or a full spa offering everything from Finnish saunas to Turkish baths.

One aspect that sets Gloria aside from some of the other resorts located along the same stretch of coastline is the state-of-the-art sports complex. The facility is as high-tech and impressive as it gets with running tracks, football pitches, swimming pools and tennis courts outside while the strength and conditioning areas inside are the most impressive, all set on 10 hectares with a 200-room hotel also on site.

Rather ominously each member of our party was asked to sign a disclaimer before experiencing the Whole Body Cryotherapy Icelab (essentially a big freezer) which is designed to aid recovery from injuries although hangovers are also listed under the ailments with which it can help.

After putting on a hat, gloves and face mask before stripping down to a pair of swimming shorts you step inside a chamber where the temperature is at -20°C. At first this doesn’t feel so bad but you only spend 20 seconds there before progressing to another chamber which is set at -40°C. Now it’s getting pretty uncomfortable but there is still more to come. After 20 seconds there you step into the coldest place on earth (-120°C) for a full two minutes. After starting off rather reluctantly it must be said that, when you leave, you feel fantastic – a nice cool off from the warm Turkish temperatures outside.

Turkish Airlines now offers return trips to Antalya from Dublin (with a layover of a few hours in Istanbul) with economy prices starting from €350 while business class trips start at €1,112.If you are travelling business class you get the full use of the Turkish Airlines lounge at Istanbul Airport which was named the best in the world in 2017. If you are travelling to play golf the airline will carry your golf equipment for free.

New Zealand could allow ‘sold out’ sports stadiums next week 08:31
Jacob Stockdale on dealing with online abuse; Seán Moran reminisces about what we’re missing 06:52
Red card replacements among new laws in New Zealand 06:17
Seán Moran: Summer’s mosaic slips away one small tile at a time 06:00
Jacob Stockdale gives keyboard warriors the slip in textbook fashion 06:28
Here is your handy guide to sport on television this week