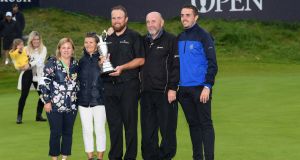 12.04pm: Shane Lowry arrives to the golf course, jumps out of the car and walks in hand-in-hand with daughter Iris, brother, Alan, Brian Moran and Alan Clancy. The breeze is freshening appreciably but the heavy stuff isn’t due until 3.0pm.

12.50am: Lowry crosses the bridge on his way to catch a buggy and head for the driving range.

1.32pm: Lee Westwood said on Saturday that no lead is big enough and that there was 100 times more pressure on Lowry. The Englishman misses a two foot putt for par on the first green.

13.42pm: Lowry makes his way to the first tee and receives a huge ovation. Tommy Fleetwood arrives about 20 seconds later and the two share a warm handshake. Fleetwood splits the fairway but Lowry pulls his into the rough.

1.59pm: Lowry (-15) holes a six foot putt for bogey having watched Fleetwood (-12) miss from seven feet. The Irishman’s lead is three but that could have been a great deal worse.

2.27pm: Fleetwood (-11) had two very good birdie chances on the first and second holes but missed the green at the third and can’t get up and down. Lowry’s (-15) lead is back to four shots. Fowler (-9) makes three straight birdies after a double bogey at the first. only three players in the last seven groups are under par for their respective rounds.

2.29pm: Koepka and Holmes (-7) are dragging each other into the abyss, a combined seven over par through four holes but an eagle for Koepka at five partially repairs the damage.

2.38pm: Lowry (-16) with a gorgeous four-iron to six feet and he drains it for birdie; Fleetwood’s (-11) effort came up two rolls short in the jaws. The Irishman leads by five with 14-holes to go. The rain is now coming down in earnest.

2.47pm: Fleetwood (-12) drives the par four fifth, Lowry comes up 40-yards short of the green but both walk off with a birdie; the Englishman watches his eagle putt dive left. Lowry’s six-footer was silky smooth and he retains a five shot lead. Westwood (-10) – his putting has been rank – and Fowler (-9) aside, the rest look too far back.

3.02pm: Gutsy from Fleetwood (-12) he misses the green on the par three sixth but gets up and down.

3.10pm: Graeme McDowell (+4) finishes his final round to a thunderous ovation, an appropriate metaphor given the weather. It is chucking it down.

3.21pm: Lowry (-18) with a third birdie in four holes, shows his short game wizardry once again, as he chips to three feet . Fleetwood (-12) in trouble off the tee shows his mettle by getting up and down from a greenside trap. The Irishman is six ahead with 11 to play.

3.57pm: Lowry (-16) with back to back bogeys – level for the front nine – and Fleetwood (-11) closes the gap to five shots as the final group head for the back nine. The chasing pack has disappeared in the gloom. It’s a three-way shootout.

4.15pm: A tale of two knee-trembler putts, Lowry (-16) holes a nasty five-footer down the slope, Fleetwood (-10) misses from a couple of inches shorter: six ahead with eight to play. Westwood (-8) is heading in the wrong direction with a bogey on 12.

5.20pm: The moment? Lowry (-14) bogeys but Fleetwood racks up a double (-9). Lowry’s face is a window to his emotions. Caddie Bo Martin makes his player smile and the tension drains away.

5.57pm: Lowry’s name is engraved on the band around the Claret Jug while he stands on the 18th tee.

6.09pm: Lowry two putts from the fringe. Arms aloft, he is the British Open champion, the sixth Irishman to win a Major, 10 of them coming in the last 12 years. ‘Hon Offaly.