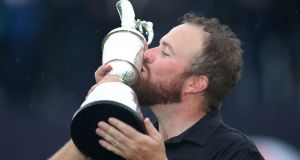 As old as this championship is, these’s always room for something new.

Shane Lowry provided his own special ingredient to the recipe in this 148th edition of the British Open; and, on a wicked day borrowed from the depths of winter, the 32-year-old’s imperious performance – shooting a final round 72 for a 72-holes total of 15-under-par 269, six strokes clear of nearest pursuer Tommy Fleetwood – left him a man apart, as the latest recipient of the famed Claret Jug.

The tears which welled up in Lowry’s eyes as he prepared to play his final approach shot, from the middle of the 18th fairway, matched those rain drops which had fallen from the skies for much of an afternoon during which he had plotted his course with a sure-footedness throughout, actually buoyed by a putt for a bogey on the opening hole.

To understand the route which Lowry – who’d started with a four stroke lead – took, that bogey on the very first hole was critical. For, it could so easily have been a double-bogey; which might well have given impetus to his playing partner, Tommy Fleetwood.

The scenarios on that opening green were numerous, as the Englishman had a birdie putt, and the final upshot – just a one shot swing – was as good as Lowry could have hoped for.

Lowry later recalled of the significance of limiting the damage there.

“I hit a ropey tee shot on the first. I hit actually a decent second shot but it didn’t go as far as I thought it was going to go. Then you’re standing on the first green, Tommy has a great chance of birdie and I’m putting for bogey from eight feet. There’s a potential three-shot swing. He misses, I make, and there’s only one shot. That settled me an awful lot.”

Indeed, the toils of others on a tough day on the links, only served to underscore Lowry’s supremacy.

For example, JB Holmes – who’d had eyes of his own on the jug – floundered to a closing 87 to become little more than a bit player in the drama; while Brooks Koepka, the dominant player in the Majors this season with a run of 2nd-1st-2nd in the Masters, PGA and US Opens so far this season, failed to make the inroads necessary to cause Lowry any anxiety.

As it transpired, Koepka would finish in a two-way tie for fourth with Lee Westwood, all of nine shots adrift of Lowry when it mattered.

No, on this day of days, Lowry – with no evidence of scar tissue from the US Open in 2016, when he’d also held a four stroke final round lead only to succumb to a charging Dustin Johnson – was able to keep a close watch on this nearest pursuer, Fleetwood, and to keep him at arm’s length.

As Fleetwood would observe afterwards: “I watched Shane in The Open. I watched how he conducted himself and how he played. And for four rounds of golf I was the second-best player in the event.”

Lowry’s round started with a bogey but he took a firm grip on matters from the fourth, where he claimed the first of four birdies on a day when the course was stingy with such largesse.

Indeed, back-to-back birdies on the fourth and fifth enabled the Offaly man to ensure he would have destiny in his own hands, even in conditions which at times had him putting on and taking off the waterproof trousers and at other times wearing a jacket or not.

Such indecision wasn’t apparent in his shot-making, for there was a clarity of purpose about how he negotiated his route to glory. Once he kept Fleetwood at a distance, Lowry – step by step, bit by bit – moved inexorably towards achieving his dream.

In fact, as the situation developed into a man-to-man battle not unlike that of matchplay, it was a double-bogey from Fleetwood on the 14th hole which effectively ensured there would be no way back for the Englishman.

Lowry’s response was to hammer the nail into the coffin by birdieing the 15th, for a six stroke lead which he retained to the end.

In what is Lowry’s first season with multiple wins – adding this British Open to his success in Abu Dhabi earlier this year – he admitted: “The one thing you want to do is you want to back up your success. So obviously in the short term I’m going to enjoy this, there’s no doubt about that.

“But in the long term you obviously want to back up your success. My big goal still remains the same and that is to be on the plane going to Whistling Straits [or the Ryder Cup] next year. That’s my plan for the next 12 months. Hopefully that involves a couple of wins along the way.”

Lowry has decided not to travel across the Atlantic for this week’s WGC-St Jude Invitational, so that he can enjoy the biggest win of his career with family and friends.

A Major champion . . . . but still grounded, the same Shane Lowry.