Ireland's Shane Lowry stands like a giant on the Causeway Coast 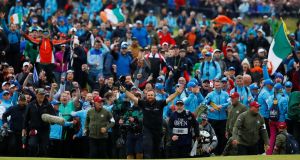 Shane Lowry raises his arms in triumph as he walks up the 18th fairway during the last day of Open Championship at Royal Portrush Golf Club. Photograph: Jason Cairnduff/Reuters

In this neck of the world where mythical giants – those of Fionn Mac Cumhaill of yore, or a vintage associated with Game of Thrones – have strode the land, few have matched the imprints which Shane Lowry left over the rugged terrain of the Dunluce links as he claimed this 148th British Open title with a dominant display that left all others trailing in his wake.

On this Causeway Coast of volcanic columns, no-one stood taller than Lowry, the 32-year-old from Co Offaly.

On a difficult, grey day of intermittent heavy rain showers and gusts of wind which reached 35 miles an hour, a final round 72 for a total of 15-under-par gave him a winning margin of six strokes over runner-up Tommy Fleetwood.

The win earned him a payday of €1.7 million, yet the moment itself was worth more than any monetary reward.

In the oldest championship of them all, with all of golf’s greatest names engraved on the base of the Claret Jug, Lowry – who’d already garnered WGCs and Rolex Series wins in his career – moved upwards to claim a maiden Major and did so with a command of the conditions which no other player came close to matching.

In becoming the fifth ever Irish golfer to claim the Open, and fourth inside the past 12 years, joining a collective in this modern age started by Pádraig Harrington in 2007 and embellished by Darren Clarke (2011) and Rory McIlroy (2014), Lowry very much did it his way.

This was a quite remarkable win, his coronation almost ordained by the golfing gods on the return of this championship to Royal Portrush for the first time in 68 years.

And, as the huge galleries around the course greeted each of Lowry’s strokes with earth-shuddering roars, with the crowds packed so deep that it was virtually impossible to actually witness the supreme shot-making of the champion, someone remarked, “it’s the first time I’ve heard a round of golf”. Never were truer words spoken, to be sure.

Whether you saw them or heard them, the upshot was that Lowry was in control, on a day when the very fabric of waterproofs were tested and the bins around the links were filled with discarded umbrellas which had been blown inside out.

This was a win forged from the depths of despair of a year ago, when he cried in his car after missing the cut at Carnoustie – his fourth straight missed cut in the championship – and wondered where his game was headed.

“Golf is a weird sport and you never know what’s around the corner. That’s why you need to remind yourself, and you need other people there to remind you. You need to fight through the bad times. I sat in a car park in Carnoustie, almost a year ago to this week, and I cried.

“Golf wasn’t my friend at the time. It was something that had become very stressful and it was weighing on me and I just didn’t like doing it. And, look, now . . . . what a difference a year makes,” said Lowry.

Only once before had Lowry led going into the final round of a Major, at the US Open in Oakmont three years ago. That, too, was a painful experience as he was usurped by Dustin Johnson; but, this time, in proving that mistakes are only mistakes if you fail to learn from them, Lowry – with caddie Brian Martin by his side – took on all-comers in a manner which few, from the Willie Park Snr in the original staging all those years ago in 1860, to even some of the modern greats, have managed to achieve victory.

Lowry, who carried a four-stroke lead into the final round, admitted: “I didn’t even know going out this morning if I was good enough to win a Major. I knew I was able to put a few days together. I knew I was able to play the golf course. I just went out there and tried to give my best. I’m here now, a Major champion. I can’t believe I’m saying it, to be honest.”

In the run-up to the championship, Lowry had a late case of nerves. The reason? He knew he was playing well, in a season which started off back in January with a win in the Abu Dhabi championship. A run of good form over the summer had only served to build up his own expectations and, on Wednesday, the eve of the championship, it hit him like a ton of bricks.

It was then that his coach, Neil Manchip, took him for a coffee in the Bushmills Inn close to the rented house which they’d taken for the week. The two found a quiet corner and talked and talked for 40 minutes as if solving the problems of the world, even if that world was their own golfing one.

“I think the talk changed a lot because I was quite nervous and anxious. The last thing you want to do is come up here and miss the cut. And that was kind of in my mind.

“I wanted to play at least four days, and wanted to put up a good show for myself. So, yeah, it really settled me down. [Afterwards] I really felt like I could go out and perform to the best of my ability the next day. So it obviously helped me an awful lot along the way,” recalled Lowry.

Lowry led for most of the first round, until JB Holmes edged past him at the death on Thursday evening, but then took control as one day followed another to finally get the job done in style.

“I think the win is huge for Irish golf. I think it’s big for Irish sport. I’m a huge sports fan. People know that. People in Ireland know that. I’m a big GAA man. I think it’s a very tight-knit community and I think those people will [appreciate the win]. I’d say people that peopled watched golf today that never watched golf before, that’s probably how I’d say it.”

As a child growing up, the son of Brendan Lowry, part of that famous Offaly winning All-Ireland team in 1982, it was golf that shone through.

“I was always a bit too slow for the big ball. I knew where the goals were, but I was never good enough. Like, I played football growing up, and football was obviously huge in my house. It was everything where I was from, the town we grew up in. I was in school, 500 kids, and I was the only person that played golf. That’s kind of where we came from.”

Lowry has followed his own path, and the journey – with its ups and downs – has been wonderful. So far. Ryder Cups. Olympics. Other Majors. There’s a ways to go yet.