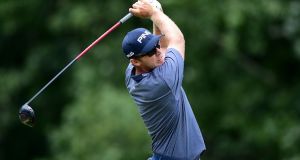 Séamus Power’s final round 69 at the Wyndham Championship on Sunday means he will head to the Korn Ferry Tour Finals - the new name for the Web.com Tour Play-offs - to keep his PGA Tour card.

The Waterford native needed to move inside the top 125 from 144th in the FedEx Cup standings this week to be sure of his playing rights next year, but he failed to build on a flawless round of 64 on Thursday and finished seven under par overall. Well off what he needed to avoid the Korn Ferry Tour Finals - which consists of three tournaments and involves the top 75 from the second tier US Tour and those who finished between 125th and 200th on the PGA Tour’s FedExCup points list.

At the conclusion of the finals there are 50 PGA Tour cards awarded and varying levels of membership on the tour for the following season.

Power’s round on Sunday included birdies on the second, fifth and 13th holes, but he dropped shots with a double bogey on the Par 4 11th hole.

Talking to Sky Sports after his round he said there were positives to take from the weekend’s golf but after a slow start to the season he was left with too much to do:

“There was some good stuff to build on going into the Korn Ferry play-offs so I just have to go there and play well.

“It was really the start, I mean I really struggled until probably April, May time. And I just had a bit too much ground to make up. So it was frustrating as I had high hopes going into the season but you don’t really have much time to regroup. You’ve just got to take a few days off here and get ready to go again in 10 days time. So some positives, but more negatives than positives unfortunately. But again you have to get the attitude turned around here pretty quick.”

Power missed 11 of his first 15 cuts of the 2019 season. He finished joint 60th overall at Sedgefield and moved up only one place in the FedEx Cup standings.

North Carolina native JT Poston became the first player in 45 years to win a PGA Tour event without dropping a shot when he beat Webb Simpson by one stroke to claim the Wyndham Championship.

Not since Lee Trevino at New Orleans in 1974 had a player negotiated 72 holes without a bogey en route to victory.

Poston stormed out of the pack, claiming his first tour victory in style with an eight-under-par 62 at Sedgefield Country Club.

Born less than 100 miles away in Hickory, and buoyed by enthusiastic support, Poston finished at 22-under 258.

An had a 60-foot birdie putt that would have forced a playoff. He gave it a good run, his ball touching the edge of the cup but rolling 10 feet beyond. He missed the comeback attempt.

“Any win out here on tour is a dream come true but to do it here in Greensboro, an hour-and-a-half from where I grew up, is something I never could have imagined,” said 26-year-old Poston.

“I’ve got so many friends and family that are here, coming in from all over the place. The celebration’s going to be a lot of fun.”

1 Waterford turn Kilkenny upside down and inside out
2 Waterford’s frenzied waves of attacks too much for Kilkenny
3 Klopp furious as injuries mount and VAR decisions prove costly
4 Ireland’s work-ons: Four things Andy Farrell needs to address
5 David Humphreys: Georgia simply can't be dropped in at the deep end
Real news has value SUBSCRIBE