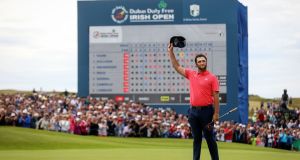 It all feels a bit like crash, bang, wallop after all. Any chance of the Dubai Duty Free Irish Open avoiding a direct clash with the WGC-St Jude Invitational next year would appear to be scuppered after the PGA Tour confirmed that the championship in Memphis will next year move forward by three weeks into the slot which the Irish Open has occupied in the European Tour schedule in recent years.

If the Irish Open stays put, then there is an unavoidable clash with the WGC. So, there are basically two options: stay – and, just as the French Open did in 2016 – don’t offer any Ryder Cup points or Race to Dubai points for those European players who opt for Memphis over Ireland; or move, releasing the tournament from the Links Swing and take another date in the revised European Tour schedule.

In reacting to the PGA Tour’s decision to move the WGC, Keith Pelley, the chief executive of the European Tour, said: “We have had discussions with the PGA Tour in recent months about the challenges presented by the global golfing calendar in 2020. We are currently finalising our full European Tour schedule for 2020 which we will announce in due course.”

Nest year’s itinerary is complicated by the Olympics and also the Ryder Cup, which has seen the PGA Tour – which Monday announced an expanded 2019-20 schedule of 49 tournaments – move to “accommodate” those complications. The PGA Tour has also announced the staging of two new tournaments, one of them, the Zozo Championship, in Japan.

The lead-up to the Olympics sees the most notable changes to the US circuit’s calendar, with the 3M Open in Minnesota (which this year clashed with the Irish Open) switching dates with the WGC-St Jude.

“After a very successful first year with our new schedule, we are thrilled to expand the number of events to 49 while maintaining a great flow from start-to-finish,” said PGA Tour commissioner Jay Monahan.

It all smacks of the PGA Tour looking after itself without regard for the impact caused on the PGA European Tour and, most specifically, to the Irish Open. Time will tell us how Mr Pelley & Co react.

Séamus in need of a Power-ful performance at Wyndham

Séamus Power will need to produce the best performance of his season at this week’s Wyndham Championship – the last event of the PGA Tour’s regular season, before the FedEx Cup playoffs – if he is to retain his full tour card for next season.

Power finished tied-25th in the Barracuda Championship but still dropped in the latest FedEx Cup standings to 144th. He needs to leapfrog up into the top-125 after this week’s tour stop in North Carolina if he is to keep his card. Pádraig Harrington is also in the field.

There is a comfort blanket of sorts for Power should he fail to make it, as he will re-enter into the Korn Ferry Tour (formerly web.com) end of season final series which will also offer tour cards to next season’s PGA Tour.

With no event on the European Tour this week, Gavin Moynihan returns to the Challenge Tour for the Finnish Challenge in Vierumaki where Stuart Grehan, Daniel Peacock, Cormac Sharvin, Robin Dawson and Ruaidhrí McGee are the other Irish players competing.

Barely a matter of weeks into his professional career, and Collin Morikawa has made a sensational impact. In six events, he has made every single cut . . . and his hot streak – runner-up in the 3M Open earlier this month and third in the John Deere – got even hotter with a breakthrough tournament win in the Barracuda Championship. Morikawa, ranked 1,039th in the world after making his pro debut in the Canadian Open last month, has jumped to 90th in the updated rankings.

“I always take less time on Sunday. I’m already loose when I get to the golf course. I don’t even need to hit balls. I’ve already stretched. I don’t know why everybody is in a panic. I’m not. I’m not stressed at all” – Brooks Koepka on his laid-back approach, in arriving to the course just 45 minutes ahead of his final round en route to winning his first WGC, at the St Jude Invitational in Memphis.

“There’s nobody in the game so far has won more than nine, and this is my 11th, so it means a great deal to have done something that nobody else has done, not even the great Jack Nicklaus or Gary Player, or we can do down a long list, the Tom Watsons and on and on” – the evergreen Bernhard Langer on winning a fourth British Senior Open and 11th career Senior Major.

Well that was on hell of a week. From the bottom of my heart I would like to thank everyone for all their kind messages. I’d like to thank my sponsors @SrixonGolf @Kingspan_IRL @bankofireland @immedis @Paddypower and @KearysBMW for their support. Time to push the reset button – Champion Golfer Shane Lowry brings a week of celebration to an end as he prepares to get back to the day job.

Fantastic to see the momentum in Irish golf continues to gather pace. JP has done so much for Ireland and its golfers. His renovation of @TheAdareManor has created an amazing stage for one of the greatest shows in golf. Congrats to all involved #Adare2026 – Graeme McDowell, considered a possible European captain for the match against the USA at the Co Limerick venue.

Surreal – 22-year-old Collin Morikawa, winner of the Barracuda championship, keeps it short and sweet after winning in just his sixth start as a professional.

A: There is no penalty. In this situation, and because a player is allowed to start each hole with any conforming ball (Rule 6.3a), it should be determined that the balls were exchanged before play on that hole began, unless there is evidence to the contrary.