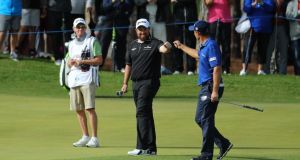 Good fight: Pádraig Harrington after chipping in on the 10th hole during the final round of the Turkish Airlines Open. Photograph: Warren Little/Getty

Pádraig Harrington puffed out his chest and fought the good fight if ultimately in vain, while Shane Lowry failed to grasp the nettle and wilted in his quest to end a two-year winless drought on tour; and, as the final round of the Turkish Airlines Open played out here at Regnum Carya resort, it was Justin Rose who again proved to be the thorn in the side of everyone else.

In producing a final-round 65 for a winning 72-hole aggregate of an 18-under-par 266, Rose – a winner of the HSBC Champions tournament in Shanghai seven days earlier – continued to his late-season dominance of the European Tour. And, in claiming a one-shot winning margin over runners-up Dylan Frittelli and Nicolas Colsaerts, the Englishman also reignited the race for the order-of-merit title, closing the gap on front runner Tommy Fleetwood to €134,839 with just two counting events remaining.

For Harrington, though, playing only on a sponsor’s invitation, there were glimpses of his old self. The 47-year-old three-time Major champion combined wizardry with resilience to force his way into contention down the stretch, only to come up tantalisingly short: the Dubliner closed with a final-round 67, for 268, two shots behind Rose. It earned him a cheque for €296,003.

Yet it could have been even better for Harrington, who, having sought inspiration with no great success on the outward run, showed his competitive instincts to full effect on the homeward journey. On the 10th hole, after finding a watery grave in the lake guarding the green with his recovery from the trees after an errant drive, Harrington holed out with his lob wedge to make the unlikeliest of pars. “I have been practising that particular shot on the range all week. Comfortable I was going to hit a good shot, holing out was” a bonus.

There followed a three-putt bogey on the 11th, after a duffed wedge shot from the middle of the fairway, but then he upped the tempo with all the gusto of old. On the par-five 12th he reached the green in two, and his eagle putt stubbornly refused to drop, but on the par-five 15th there would be no mistake when another eagle presented itself.

After a huge drive there Harrington was left with 169yd to flag. “It was nice to put a good drive into play in that situation. In the past that’s the sort of thing I haven’t done,” said Harrington. His first impulse was to hit a nine-iron, only to be talked into hitting a three-quarter eight-iron by his caddie, Ronan Flood. The shot was executed to perfection, finishing 12ft behind the flag. He nailed the putt and, at that point, shared the lead, on 16 under.

That share of the lead didn’t last long, as the roar from the 17th green up ahead confirmed that Rose had birdied as the world number six stepped up the gears. Indeed Rose birdied three of the last four holes – the 15th, 16th and 18th – to claim a dramatic victory, sealing his first back-to-back wins on the European Tour in a two-decade career.

For Harrington, though, there were chances to catch him. Harrington had a 12-footer for birdie on the 16th, which failed to drop; on the 17th, his greenside chip finished one roll short of falling into the tin cup; and, on the 18th, his approach set up another birdie putt from 10ft. Again, it failed to drop.

All in all, however, Harrington was content with his lot. “I gave it three good chances in the last three holes, had three good looks at them. Another day I would have made the birdies coming home, but I’m just happy to be in that position. I’m really happy with my ball striking – big improvement off the tee for me, which is very important. I have been struggling, so that is a positive. I look forward to doing what I am doing with my game at the moment and can’t wait to get to Sun City.”

Lowry signed for a finishing round of 72 for 271 (13 under), which left him in tied for eighth. Having started the day in a share of the lead with Kiradech Aphibarnrat, it was a disappointing closure for the Offalyman, who struggled off the tee and also with the putter in hand. However, his cheque for €134,091 proved important in moving him to 49th in the Race to Dubai standings and guarantees making it to the DP World championship season finale.

“I never got it going,” conceded Lowry, whose challenge died a death when his approach to the par-five 15th hit the rocky wall guarding the green and finished in the lake. Although he’d driven into the rough he had a decent lie, which tempted him to attempt to reach the green in two. “I had to go for that. I could have knobbed it down. I could have wedged it on and maybe made four. I said on the 18th green if I had of laid up and made five and lost by two I would have been sick and blaming myself,” said Lowry, adding: “It is still a good week’s work. I wasn’t that great off the tee. But when I hit it in play my iron play feels so good, so I have three days to sort that out before the Nedbank” in Sun City.

Paul Dunne closed with a disappointing 72 for 276, his tied-23rd-place finish earning him €63,737, which enabled him to remain at 14th in the updated Race to Dubai standings.

With back-to-back wins, Rose has transformed his season but has decided not to add the Nedbank to his schedule and will attempt to overtake Fleetwood in the season’s showdown in the desert. Of his two wins in as many weeks, Rose – who had finished runner-up to Sergio Garcia at the Masters back in April – acknowledged it had changed his perception of the season. “It would be a B minus probably a couple of weeks ago. A good solid year, top 10 in the FedEx Cup, it was good but no win . . . Now I’m probably at A minus, with one putt at Augusta away from being an A-plus.”

Sanctioning Cork Harlequins over Covid concerns ‘disappointing’, says Sargent 17:16
Diego Maradona dies of heart attack, aged 60 17:24
Cavan confirm they have no issue with playing Dublin at Croke Park 16:21
Ryan happy to get back to leading by example when Sexton returns 15:54
Mayo’s James Horan criticises ‘outrageous’ 26-player match day limit 13:52
Here is your handy guide to sport on television this week