JJ Spaun in control as darkness falls in Las Vegas 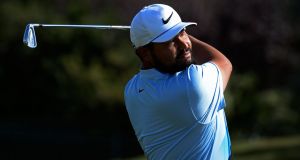 JJ Spaun hits his approach shot on the 16th hole during the second round of the Shriners Hospitals For Children Open at the TPC Summerlin in Las Vegas, Nevada. Photograph: Robert Laberge/Getty Images

American JJ Spaun took control of the Shriners Hospitals for Children Open with a six-under-par 65 that gave him a three-stroke lead when play was suspended on the second round in Las Vegas on Friday.

Spaun, who trailed leader South Korean Whee Kim by a shot after the first round, mixed seven birdies with just one bogey to take the clubhouse lead on 11-under for the tournament.

Fellow American Kelly Kraft, who made a hole-in-one from 174 yards at the par-3 fifth hole, was second at eight-under with three holes remaining when play was called for the day in fading light.

Ireland’s Graeme McDowell shot his second consecutive round of 70 to leave him two under par overall, while Seamus Power followed up on his first round 69 with a 71 to also go two under. It was a mixed round for the young Irishman with five bogeys and five birdies.

Now in his second year as a full-time PGA Tour member, Spaun said he was ready to take the next step in his career.

“I’ve had a year’s experience now on the tour and this year it’s kind of just taking my game to the next level instead of being someone who lingers around the cut or top-20s,” the 27-year-old told reporters.

“It’s time to step up if I want to do something big out here on tour and make a name for myself.”

Robert Garrigus also made a big move to reach seven-under and third on the leaderboard thanks to his 65, which could have been even better but for a double bogey at his ninth hole.

“It was a lot of fun,” Garrigus said. “I really didn’t swing as good as I wanted to but the putter worked really well today which can cure a lot of things.

“All in all it was a great day with eight birdies. I’m going to cherish this one.”

Australian Aaron Baddeley and Patton Kizzire each fired 66s to move to six-under.