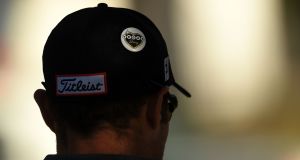 A detailed view of the ‘Vegas Strong’ pin worn by A.J. McInerney as he walks to the 11th tee during the first round of the Shriners Hospitals For Children Open at TPC Summerlin in Las Vegas, Nevada. McInerney is a survivor of the Route 91 concert shooting. Photo: Stacy Revere/Getty Images

AJ McInerney was talking near the TPC Summerlin practice range when he froze in midsentence. Roughly 20 yards away, a machine had spit dozens of freshly washed golf balls through a plexiglass chute, and the clattering, rat-a-tat noise they made as they spilled out transported McInerney back to the night of October 1st.

“That freaks me out,” said McInerney, a native of the Las Vegas area who was in the crowd of concertgoers on the final night of the Route 91 Harvest festival on the Strip.

McInerney and his girlfriend were standing several yards from the stage, swaying to the music of Jason Aldean, when a gunman opened fire from the 32nd floor of the Mandalay Bay Resort and Casino.

McInerney and his girlfriend, Alyssa Martine, escaped the hail of bullets that killed 58 people and wounded several hundred, including one of their friends. A month removed from that nightmare, McInerney, 24, made his PGA Tour debut here in Las Vegas on Thursday at the Shriners Hospitals for Children Open, an event he attended as a fan several times when he was a teenager. He shot level par in his opening round.

McInerney, who was on the Web.com Tour last season, is playing on a sponsor’s exemption, and he considers the opportunity another step in what he described as “the full process of coping with” one of the deadliest mass shootings in American history.

“It’s been a lot easier to focus on something else,” McInerney said during an interview Tuesday.

The tournament, which debuted in 1983 with the first million-dollar purse in PGA Tour history, has attracted a field that includes eight major winners. The two-time Masters champion Bubba Watson had not planned to make his next official Tour start until the Phoenix Open in February. But after the shooting, he changed his mind and decided to add this event.

“Why would you not want to come here and support this place and show love?” said Watson, whose last competed here in 2007.

Charley Hoffman, like McInerney, starred on the golf team at the University of Nevada, Las Vegas. He has lived in Las Vegas for 20 years, and he is donating his entire paycheck from this week’s event to help those affected by the shooting.

Every year before this event, Hoffman organizes a charity tournament to benefit his foundation. His amateur participants this year included Aaron DeView, whom Hoffman invited after hearing about his actions on the night of the shooting. DeView, 49, turned his Toyota Tacoma into a makeshift ambulance, transporting victims he came across while fleeing the gunfire to a triage center set up by paramedics not far from the concert grounds.

By pure happenstance, McInerney, a late addition to the event, played the pro-am alongside DeView, and they spent the round sharing their stories about the night of the shooting.

DeView, who described the past month as “the highest of highs and the lowest of lows with nothing in between,” said: “I started talking to AJ and I thought, ‘My gosh, we’re not golfing. We’re healing.’”

To prepare for the pro-am, DeView, a 13-handicapper, played a practice round at TPC Summerlin and was randomly assigned a cart — No58. Nothing, though, seems random to DeView after he survived a torrent of bullets by sheer luck. The cart and being paired with McInerney, he said, feel like a message that “everything’s going to be okay.”

That was the first time any of us had been out since it happened. We used golf as a way to have fun again

DeView, a bartender, returned to work on the Strip four days after the shooting, though by his own admission he was not ready to be back in the midst of crowds. “It’s still hard,” said DeView, whose truck still has a bullet hole in it.

McInerney understood. For three days after the shooting, he was unable to sleep. On the fourth, he also returned to his job, sort of. It was his 24th birthday, and McInerney and seven friends who had attended the music festival met at a par three course downtown, about two miles from the site of the concert.

“That was the first time any of us had been out since it happened,” he said. “We used golf as a way to have fun again.”

A bigger test for McInerney came on October 10th, when the NHL expansion franchise, the Vegas Golden Knights, held their home opener against the Arizona Coyotes at T-Mobile Arena, roughly a mile from the site of the shooting. McInerney attended the game with friends who had also been at the concert.

McInerney said he was fine once he got inside with the capacity crowd of more 17,000 people. The wait to enter the arena was another story.

“I felt really uncomfortable standing in line and waiting to go through the metal detectors,” he said. “There’s hundreds of people in a couple different lines, and there’s buildings all around, and I was like, there could be someone in that parking garage and he’s got 200 people in line that he could be targeting.”

The night was a huge success, and not just because the skaters in the home jerseys won.

“That was the first time I had been in a public place like that since the shooting,” McInerney said, “and I think it was important for me and my friends to be there and kind of get that out of the way. Because you can’t live your life in fear.”

As golfers, it’s easy to get locked up in your own little bubble, so that’s kind of bigger picture, I guess

A week after the shooting, McInerney returned to the concert grounds, which were still cordoned off from the public. As best he could, he tried to retrace the steps of his escape to the MGM Grand parking lot, about a mile away, where he had parked his truck.

“I was just trying to piece it together,” he said. “That was one coping way for me to kind of put everything in perspective.”

No matter where McInerney is, certain triggers instantaneously send him back to the scene. They include any noise, like the one from the ball-washing machine here, that sounds like firecrackers; a helicopter flying overhead; or his favorite Jason Aldean song, “When She Says Baby,” which he was performing when the first shots rang out.

“Those are the things that bring back the memories,” McInerney said, “but it also helps me remember those who were killed and helps me to say a prayer for those families.”

Golf has provided a welcome refuge for McInerney, who said he was dealing “with that guilty feeling of ‘Why did I get so lucky to live?’”

“Part of the coping process for me,” he added, “is being able to come out to the golf course and throw my headphones in and just kind of forget about everything for a couple hours.”

He knows there are survivors who are still struggling. “My girlfriend being one of them,” he said.

A few days after the shooting, Martine flew to New Jersey, where she has family, to escape the emotional triggers that loomed around every corner of this city. Two weeks later, she posted on her Twitter account that she experiences anxiety “just seeing a concert on Snapchat.”

McInerney appreciates that his life will never be the same as it was before October 1st. Nor should it be, he said.

“I’m playing for Las Vegas, and that whole ‘Vegas Strong’ slogan that we’ve kind of coined,” he said. “As golfers, it’s easy to get locked up in your own little bubble, so that’s kind of bigger picture, I guess.” – New York Times service