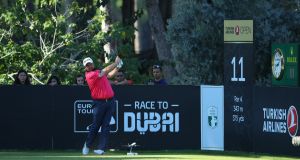 Shane Lowry of Ireland tees off on the 11th hole during the second round of the Turkish Airlines Open at the Regnum Carya Golf & Spa Resort in Antalya, Turkey. Photo: Warren Little/Getty Images

As the mesmeric call to prayer regularly emanated from the mosque across the roadway by the third hole, another sound provided its own solace for Shane Lowry as he manoeuvred into contention in the second round of the Turkish Airlines Open here at Regnum Carya: it was of ball clattering flagpole, always a good sign of a player’s potency, and also of crowds, even those relatively sparse by tour standards but with great enthusiasm, applauding birdies.

Lowry, as it happened, had seven birdies in a second round of 66 which lifted him to a midway total of eight-under-par 134 in a share of fourth. Although some six shots adrift of runaway leader Nicolas Colsaerts of Belgium, events at last week’s HSBC Champions – where Justin Rose overcame an eight-shot final round deficit on Dustin Johnson to triumph – will serve as inspiration to chasers such as Lowry and as caution to someone in Colsaerts’s position.

That ball clattering into the flagstick happened to Lowry on the 14th hole, an uphill par 3 of 172 yards where his eight-iron scored a direct hit. There would be no hole-in-one though, as the ball settled 18 inches from the pin for a tap-in birdie in a stretch of holes – from the 13th to the 17th – that yielded four birdies for the 30-year-old Offalyman, who is on a mission here to transform his season from a disappointing one into a good one.

Lowry isn’t yet into the Race to Dubai finale (the DP World) in a fortnight’s time, needing to jump into the top-60 on the order of merit after next week’s Nedbank, but his move here would indicate stronger ambitions that that as he chases a first tournament win since his WGC-Bridgestone Invitational two years ago.

In a season when he has had only fleeting times in contention (most notably at the BMW PGA in Wentworth back in May, when a drive out-of-bounds on the closing stretch scuppered his ambitions), Lowry claimed to be “excited” going into the final two rounds in a challenging position. However, his immediate post-round action was not to head to the dining area but instead to the practice range to sort out what he viewed as some “tentative” driving coming home.

For a second day running, he bogeyed the 18th hole, but the other two wayward drives produced stunning saves and more. On the par-5 15th, after driving into the pine forest, he salvaged a par; and on the 16th, he produced a stunning recovery wedge shot of 148 yards from the rough up and over the pine trees to five feet for birdie.

Colsaerts may appear to have grabbed the tournament by the scruff of the neck – the Belgian producing seven birdies in a bogey-free round, as he signed for successive 64s, to be four shots clear of Eddie Pepperrell – but Lowry was unfazed by being cast in the role of pursuer.

“There is nothing worse than playing these big tournaments, the ones with no cut, and being down the back of the field and trying to battle for 30th place all weekend. I am in a lovely position and I know Nicolas is a good bit ahead but you never know what can happen in golf.

The other two Irish players in the limited, no-cut field found themselves locked together in tied-13th place on five-under 137. Paul Dunne had an unusual finish – hitting a “daisycutter” tee-shot that first hit the ground 110 before its own speed propelled it a further 160 yards to set up an eight-iron approach – for a rare birdie on the difficult 18th as he shot a second round 70, while Pádraig Harrington had a second round of 72 to join Dunne on that mark.

Dunne was the last man on the range for the second night running working with his Greystones coach Karl Holmes to sort out a glitch. “The club is just getting really steep on the way back, but I am struggling to let the club go behind me without having any confidence of it taking it to the course. I can do it on the range if I do it in slow motion, and then if I try to put any speed on it I struggle again. Struggling with that, one of those things I will work at it and hope to find it eventually and hopefully soon,” he explained.

For Harrington, there was little of the fluency of his opening round. “I need the good short game and the good long game together. Both were out there today, just not at the same time,” said Harrington, who performed some magnificent escapology (particularly his chip from beside the pine trees on the second) early on, but then suffered back-to-back bogeys on the 12th and 13th which he attributed to the glare of the sun on the face of a new lob wedge.