Seamus Power tied for third heading into final round in Mississippi 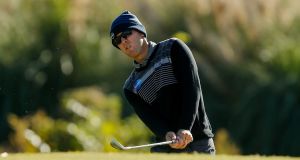 Seamus Power of Ireland plays his shot on the 17th hole during the third round of the Sanderson Farms Championship at the Country Club of Jackson in Jackson, Mississippi. Photo: Michael Reaves/Getty Images

American Ryan Armour carded a third round of 67 to move five shots clear of the chasing pack at the Sanderson Farms Championship.

The 41-year-old dropped shots on three consecutive holes — the 5th, 6th and 7th – but recovered on the back nine capped off with a 57-foot putt on the par-4 16th to sit at 15 under for the tournament.

Fellow countryman Chesson Hadley went round in 68 to move up to second in Mississippi, with five tied in third place at nine under.

Among them is Irishman Seamus Power, whose third round started strongly with two birdies but he dropped shots on the 7th and 8th.

Two bogeys and three birdies on the back nine meant the 30-year-old chalked up 71 for the round and is still in contention ahead of tomorrow’s final day.

With the top 50 in the world eligible to compete in the WGC-HSBC Champions in China, the top ranking player in the field is world number 75 William McGirt, who sits tied for 23rd on five under.