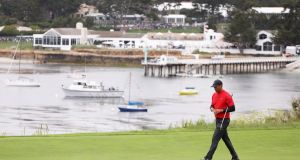 Tiger Woods is in the process of designing a short course at Pebble Beach. Photo: Christian Petersen/Getty Images

No sign yet of Tiger Woods reappearing on the PGA Tour but the 15-times Major champion has put in an appearance at Pebble Beach, where he – and his design company – are responsible for a new nine-hole short course layout and also a putting course.

The Par 3 course features holes ranging in length from 47 yards to 106 yards and measures the mighty total of 607 yards which doesn’t even come close to that of the longest hole in golf, the Par 7 964 yards seventh at Satsuki Golf Club in Sano, Japan.

In the case of Woods’s design, short is very much beautiful and, – typical of Par 3s and pitch and putt courses in Ireland – is aimed at getting players to use short-game ingenuity and also to attract new people to the sport with quick, fun rounds.

“Golfers will have the choice to play nearly any club off most tees and around greens, which will make them think and channel their creativity. It’s going to be a lot of fun,” said Wood who has aligned each hole’s yardage to correspond with a significant year in Pebble Beach history, with on-tee plaques relaying the stories of the number with the player observing that he wants players to feel the “spirit” of what he called an “iconic golf destination.”

Pebble Beach, of course, is where Woods was a record 15 strokes winner of the US Open in 2000. His new short course will open for play in 2021, while the putting course – similar to those which can be found in Scotland – will measure some 20,000 square feet.

She’s only gone and done it again. Following her runner-up finish in the Australian Open back in February, So Yeon Ryu donated €52,000 – half her prize winnings – to the Australian bushfire relief; now, following her win in the Korean Open, the 29-year-old has donated her entire purse, of €183,000, to Covid-19 relief efforts.

Ryu, a winner of the US Open back in 2011, hadn’t played since the coronavirus outbreak but made it a winning return with a one stroke winning margin over compatriot Hyo Joo Kim to lift her national open for the first time.

Then, at the awards ceremony, she revealed the prizemoney would be going tto charity. “I called my mom, told her that I’m going to make the announcement so don’t be surprised. She was just as happy as I was. Since this tournament has a lot of meaning to me, and I thought that I may be able to play better if I had a positive goal, I came up with (the idea to donate) last night. It’s been a while since I competed in a tournament, I did want to win.”

37/38: Since 2003, 38 players have held or shared the 54-hole lead on the PGA Tour and shot 65 or lower in their final round; 37 of them went on to win, but Abraham Ancer became the first not to claim a title after his closing 65 in the RBC Heritage left him one stroke shy of Webb Simpson.

“No offence to Hilton Head, but they’re seeming to not take it very seriously. It’s an absolute zoo around here. There are people everywhere. The beaches are packed, every restaurant is crowded” – Justin Thomas wasn’t too impressed with the lack of coronavirus observation measures in the South Carolina community.

“Great to see Chris Kirk win on KF Tour. Tough ride the last few years” – European Tour player Richie Ramsay tips the cap to Chris Kirk, winner of the King & Bear tournament on the Korn Ferry Tour. Kirk, who took nine months out last year to battle his alcohol addiction, was first reserve for the RBC Heritage but took the decision to play on the secondary circuit and was rewarded with his first tournament since 2015.

“@RBCHeritage was a blast once again! It’s one of my favorite events on Tour! 62 to finish today, was the perfect way to end!” – Dylan Fittelli. The South African shot the low round of the final day, finishing in tied-eighth behind Webb Simpson in the RBC Heritage.

“Fanless events been refreshing. Great audio picked up from Players/Caddies. Also no stupid shouting from people in the crowd” – Gavin Moynihan on the quiet return to tournament play stateside.

The list of potential winners included some of the game’s greats for the 1975 US Open at Medinah. Except, it didn’t happen that way. While Jack Nicklaus contended down the stretch, only to bogey his final three holes and miss out on a play-off by two strokes, and Tom Watson blew a three-stroke 36-holes lead over the weekend to fall away, the destination of the title came down to an 18-hole play-off that faced Lou Graham against John Mahaffey.

Mahaffey had the gift of the gab and was known for his comedy routines and would become a golf broadcaster when his playing days were done. His pitch at US Open glory, though, came undone against Graham, who had turned professional after serving time in the US Army. Graham’s only Major title win was delivered with a level-par 71 that outscored Mahaffey by two strokes. “It was a golf tournament that begged to be forgotten,” wrote sportswriter Dan Jenkins of the championship that extended into a fifth day.

Q: On arriving to the location where his tee shot has finished, Player A discovers the ball is on a cart path to which he is entitled to take relief. However, he also notices that the nearest area of relief could conceivably mean the ball may roll and come to rest in a bush in the relief area. Knowing that the dropped ball would not be in play without intent, the player test drops a ball in one side of the relief area to see if it rolls into the bush. Is this permissible?

A: The dropping procedure in Rule 14.3 means there is an element of uncertainty when taking relief under a rule. However, it is not in the spirit fo the game to test how a dropped ball will react. And this particular action is covered by Rule 14.4/2 (Test Drops Are Not Allowed) and, since this act is contrary to the spirit of the game, the committee is justified in disqualifying the player under Rule 1.2a (Serious Misconduct).

John Higgins makes his maiden Crucible 147 13:01
Paul Stirling extends T20 deal with Northamptonshire 13:03
Alexis Sánchez joins Inter to save Man United €46.5m in wages 12:26
David McGoldrick named Republic of Ireland player of the year for 2019 10:57
‘Slim to no chance’ of Nick Kyrgios playing in French Open due to Covid-19 fears 09:27
Here is your handy guide to sport on television this week