Lowry, Graeme McDowell, Paul Dunne and Rory McIlroy all made the cut 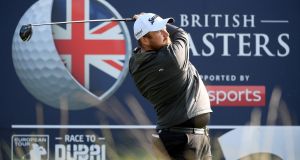 Tyrrell Hatton will take a three-shot lead in the weekend at the British Masters as he goes in search of his second European Tour title.

In miserable early morning conditions, Hatton added a second round of 65 to his opening 63 at Close House with Shane Lowry, Paul Dunne and Graeme McDowell six shots back and Rory McIlroy a further two behind.

Lowry was the best of the Irish on the day and could easily have got within touching distance of Hatton had it not been for disappointing bogeys at the ninth and the 12th.

At the ninth the Offalyman had just a sand wedge in for his approach but conspired to miss the green and fail to get up-and-down before he three-putted a good birdie chance at the 12th to bookend a poor four hole run.

However, those four holes – which he played in two over par – were in contrast to the rest of an excellent round which included six birdies and an exhibition of glorious ball-striking. Had the putter been that bit hotter his final scorecard would have read even better than the 66 he did shoot.

Meanwhile, McIlroy could only add a 69 to his opening 67 to lie eight shots off the pace on four under alongside former Masters champion Danny Willett.

A disappointing start to his round saw the four-time major winner go through the first five holes in two over par to slip outside the cut mark but he rallied with three birdies to ease into the weekend where he will need to go low to have any chance of salvaging a win from a so far barren season.

Earlier Graeme McDowell had signed for a 68 to go into the weekend at six under, while Paul Dunne matched both the 2010 US Open champion’s second round score and his overall score after a round in which a number of birdie putts just wouldn’t drop.

But it’s Hatton they will all be looking to catch, even if the Englishman had other things on his mind after signing his scorecard.

“I’m absolutely devastated I can’t play FIFA 18,” Hatton said after a round containing six birdies and one bogey. “It’s just as well I’m away for another few weeks otherwise I’d probably waste 12 hours a day on it.

“I went to this event with the England Under-18 practice squad when it was at The Belfry and it’s a great event, one that I’ll always have on my schedule.

“It’s good to be back in form with a big run of events coming up with huge world ranking points. I’d like to play as well as I can and climb up the world rankings and secure (a place) in all four majors again next year.”

Westwood added a 65 to his opening 66 and has yet to drop a shot this week despite coping with the demands of hosting the event, which included hiring an extra field for additional parking as more than 18,000 spectators attended on Thursday.

“It was nice to stand on that first tee yesterday and see so many people here and the course in such great condition, and then it was nice to play so well,” the former world number one said.

“I like my position going into the weekend and I guess it’s nice for the host to be in contention.

However, US Masters champion Sergio Garcia will not be around for the weekend after he could only manage a second round 69 to finish one under and one shot outside the cut mark.

Rugby union looking more like league in Australia; Jack Byrne enjoying change of attitude in Cyprus 07:20
Amber Barrett hoping hard work will pay off with Ireland 06:44
West Ham ‘really disappointed’ after win over Leeds, says Moyes 06:28
Jamison Gibson-Park embracing life as the main man 06:53
Games remain on hold as the GAA wait for word from the Government 06:49
Here is your handy guide to sport on television this week