Will the US Presidents Cup team take a knee? Don’t hold your breath 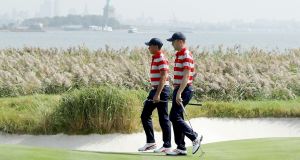 Rickie Fowler and Justin Thomas of the United States during a practice round prior to the Presidents Cup at Liberty National Golf Club in Jersey City, New Jersey. Photo: Elsa/Getty Images

It is the perfect or imperfect storm, depending on one’s outlook. The Presidents Cup does not create a flicker in the wider golfing consciousness through any given year, but this week focus will be intense.

The swell of sporting protest last weekend ordinarily would not resonate much in golf, commonly an individual sport, but this time it’s different for a tournament normally afforded little status or interest. A competition bearing the name of the president, which Donald Trump is even likely to attend, will see United States flags raised and an anthem sung when the opening ceremony takes place on Thursday.

How will golf, not a sport prone to political protest and one directly linked to Trump in so many senses, respond? And, in fact, how should it? Should golf automatically follow the NFL lead through sporting solidarity or is the undercurrent that this sport stands for another set of beliefs entirely?

Steve Stricker, the US captain, played down any suggestion of another anthem protest. He canvassed player opinion on that very matter. “I just wanted to know what they wanted to do and how we wanted to proceed as a team,” Stricker explained. “So we were going to do what we always do and that’s take off our hat and put our hands across our chest and over our heart and respect the flag. So that’s what we’re planning on doing.”

The presence of Tiger Woods merely adds to the sense of intrigue. The prospect of his return to the public eye as a US vice-captain, his first such appearance since a driving under the influence charge, was notable enough before subsequent events.

The 14-time major winner’s shackles have loosened recently in respect of addressing what he perceives as injustice, but a political statement from one of the most iconic sportsmen of a generation would be as extraordinary as it remains unlikely.

“I think you’ll see in golf that there’s a little bit more restraint,” says Davis Love III, one of Woods’s fellow vice-captains. “We adhere to our rulebook and to our core values and to our traditions, and I think that’s why our sport is so successful.

“I think President Trump is right. There is a time for protest and it probably isn’t during the national anthem. Our country has fought hard for that right.”

Against this backdrop, the actual status of the competition and its lack of meaning will be overlooked. Many of those performing in the meeting of the US and their international opposition would relish the opportunity for an official off-season. Here they are, on the weekend after the PGA Tour concluded for 2016-17, playing what relates to little more than an exhibition match in New Jersey.

It is a horrendously imbalanced one at that; with the US having won nine of the 11 stagings of the Presidents Cup and their supposed challengers only one. In 2003, a 17-17 tie transpired with Jack Nicklaus and Gary Player as respective captains. The international side continues to lack anything like strength in depth despite the obvious talents of Jason Day, Louis Oosthuizen, Adam Scott et al.

Here is the rub. The PGA Tour itself presides over the Presidents Cup – in contrast to the Ryder Cup – and therefore dons public relations belts and braces. How the richest tour in the world would love this clash to earn anything like the status as afforded to the Ryder Cup, when the narrative is actually lower league versus one of sport’s most iconic battles. The PGA Tour dreams of the Presidents Cup rising as a big deal; however undermined that notion is by how results have played out. Factor in the scope for fresh marketing potential overseas and the PGA Tour’s approach is wholly understandable.

For further nods towards how the tour influences proceedings, a glance at captain’s picks this time around are instructive for a cynic; Phil Mickelson, the golden boy of the PGA Tour, was amongst them despite form which points to no win since 2013, as was Anirban Lahiri. The latter was 16th on the international team’s points table; India, Lahiri’s home country, is a huge source of potential growth for the PGA Tour.

Jordan Spieth, Dustin Johnson, Rickie Fowler, Justin Thomas and others will inevitably retain the Presidents Cup before enjoying what is a well-earned if brief rest from competitive golf. Attention, though, will be broader this time around; to the point where golf may enter a debate with its own social conscience.