US race into the lead after first day of Presidents Cup 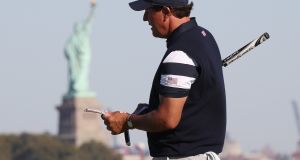 US team golfer Phil Mickelson on the tenth hole during Foursomes play at the 2017 Presidents Cup in Jersey City. Photograph: PA

The Americans hold the momentum after the opening day of the Presidents Cup, leading the Internationals by 3.5-1.5.

It was an impressive start for the hosts, whose team features the likes of FedEx Cup champion Justin Thomas, world number one Dustin Johnson, Open champion Jordan Spieth and US Open winner Brooks Koepka.

Thomas and Rickie Fowler made short work of the first foursome with a 6-and-4 victory over Charl Schwartzel and Hideki Matsuyama, with Fowler holing a 72-foot chip shot for birdie on the par-4 third hole.

Spieth saved par from 33 feet on the par-4 11th hole to set up another American victory for him and Patrick Reed, winning 5-and-4 against Emiliano Grillo and Si Woo Kim, while Johnson and Matt Kuchar fought hard from a shaky start to record a one-up win over Adam Scott and Jhonattan Vegas.

In a tense match which went to the 17th hole, South African pairing Louis Oosthuizen and Branden Grace took the first win of the day for the International team over Koepka and Daniel Berger, winning 3-and-1.

The final match up of the day featured Australians Jason Day and Marc Leishman against the American team’s Phil Mickelson and Kevin Kisner, in what turned out to be a closely-fought battle right to the final hole.

The Americans took an early lead, but the International pairing were not giving up, squaring the match up before holding a one-up lead late on.

A series of errors left the match all square going into the 18th hole, where Mickelson missed a short putt, leaving both teams with half a point.

After the match, Leishman told a press conference: “(It was a) very up and down match. Being three down after seven was not the ideal start. Then we went four holes in a a row and we’re all square, then up again, and a bit all over the place. To get a half out of it was probably disappointing, but also pleasing. Kind of mixed emotions.”

The United States are the favourites to lift the trophy at Liberty National in New Jersey, having won nine of the 11 biennial contests to date and the last six in succession following a tie in 2003.

The International team’s only success was in Australia in 1998.