US can clinch the Cup once more on Saturday, leaving Sunday’s singles as dead rubbers 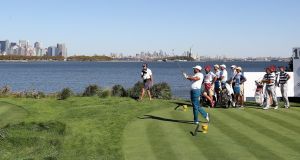 Top-ranked International team member Hideki Matsuyama acknowledged on Friday that he has not carried his weight in the first two days at the Presidents Cup.

Matsuyama, ranked third in the world, has gone off the boil since he finished tied for fifth at the U.S. PGA Championship in August and has no ideas why.

“I wish I knew why I haven’t been playing well,” Matsuyama said after he and Canadian partner Adam Hadwin halved their four-ball match against Americans Jordan Spieth and Patrick Reed.

Matsuyama said that Hadwin had carried him on the back nine, as the International duo surrendered a two-up lead over the final four holes.

The United States were threatening to run away with another Presidents Cup after a four-ball rout on Friday that left a International team reeling and searching for answers.

Under the gaze of the Statue of Liberty, the United States have been domineering hosts, winning four of five four-ball matches and halving the other surging to a 8-2 lead to the delight of a giddy home crowd at Liberty National. The United States have won nine of 11 Presidents Cups, including the last six and if the International team, comprised of players from the rest of the world except Europe, are to end the drought they will have to overturn the biggest US advantage ever after Day Two of the biennial competition.

“Yesterday I drove it well but today I was all over the place,” said Matsuyama, who lost his foursomes match on Thursday with Charl Schwartzel.

Matsuyama said he had cracked the face of his driver at the BMW Championship two weeks ago and had struggled with his tee shots ever since.

“Since then I’ve been trying to find another shaft and head to go together,” he said.

“I spoke to him this evening, and he just said, ‘my timing’s off,’” Price said.

“He said, ‘Adam played great today, and I kind of felt like I let him down a little bit because I hit a lot of loose shots and left him on his own a lot.’

“And when a player tells you that, he’s basically telling you, ‘sit me out tomorrow. That’s what we decided to do.’”

So complete has been the United States dominance that they can clinch the Cup on Saturday, leaving Sunday’s singles nothing more than dead rubbers.

With both foursomes and four-ball action scheduled for Saturday, the United States need to collect 7.5 points from a possible eight to decide the competition.

1 Tianna Bartoletta: ‘After you’ve gotten your medal, you become black in America again’
2 Betting shops face uncertain future as they prepare for Monday reopening
3 Ian O’Riordan: An education in race and running during college days in America
4 Premier League stadiums to be divided into red, amber and green zones
5 Sideline Cut: Marcus Rashford proves himself a leading man off the pitch also
Real news has value SUBSCRIBE

Timo Werner giving up on Liverpool dream on path to being truly wanted 13:35
Premier League stadiums to be divided into red, amber and green zones 13:29
NFL admits league should have listened earlier to players protesting 12:23
Solskjaer welcomes extra substitutions and expanded squads 12:11
Sideline Cut: Marcus Rashford proves himself a leading man off the pitch also 12:00
Here is your handy guide to sport on television this week