Rory McIlroy and Spieth both relaxed after quick starts

‘To have the ability to stay patient, because of the position I’m in, that’s a nice luxury’ 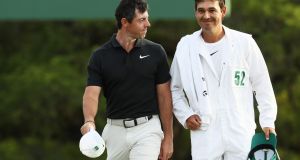 Rory McIlroy and caddie Harry Diamond walk across the 18th green during the first round of the 2018 Masters. Photograph: Jamie Squire/Getty Images

The game of pursuit is on, and Rory McIlroy - seeking that final piece in the jigsaw to complete a career Grand Slam - is up for the challenge.

Although Jordan Spieth caught fire on the homeward run of the first round of the Masters to sign for a sizzling six-under-par 66, McIlroy completed the first part of his own task by not being put on to the back foot: the 28-year-old Northern Irishman showed great battling qualities to make par saves at his closing three holes for a 69, three adrift of Spieth.

“You look at it, and not anyone is really getting away (from the field),” said McIlroy, who broke 70 in an opening round for only the second time in 10 appearances.

“This is my best start a few years and it is such a hard course to play catch-up on. If you start to chase it around here, that’s when you start to make mistakes. To be right up there and to have the ability to stay patient, because of the position I’m in, that’s a nice luxury I have over the next few days.”

McIlroy has recorded four successive top-10 finishes since 2014, but on each occasion gone into the weekend well out of contention.

This time, a fast start has positioned him to challenge and to use patience as a 15th club in his bid to reel in Spieth, whose remarkable record at the Masters - winner in 2015, and runner-up twice - has seen him lead or share the lead in nine of his 17 rounds.

As far as McIlroy is concerned, his own opening round of 69 ensures he can adopt a stress-free approach. “It relaxes you, you can play more relaxed; you don’t have to chase. There’s just a different mindset . . . the key is to stay patient. I feel like getting off to a good start will allow me to keep that mindset for the next few days.”

Spieth’s run of five birdies - from the 13th to the 17th - moved him into pole position, although an up-and-down par save on the 18th hole, after wickedly pulling his tee-shot left into trees, almost provided as much satisfaction to the American.

“I’ve had to do some interesting things on 18 in my career here. It’s actually one of the more comfortable tee shots for me. I just wasn’t very on with the driver, and I was playing a fade and just kind of got it there early,” said Spieth, who could only chip sideways through the trees back to the fairway before missing the green with his approach, adding: “But it was a beautiful chip shot (from greenside), probably couldn’t have gotten closer with a whole bucket of balls.”

Spieth, echoing McIlroy’s thought process, was also glad to get off to a quick start: “I think quick starts are important in any event. It’s not unique to the Masters at all; it’s any tournament. If you get off to a good start, you’re in control of your own fate, versus needing a little bit of help. This tournament often feels like there’s six rounds with how the weekend grind is and well, really any major. I feel like I’m kind of one round down out of six, so I’m not getting ahead of myself.”

The Texan claimed a two shot opening round lead over Tony Finau and Matt Kuchar, with McIlroy in a seven-way tie for third.