McIlroy hoping the numbers stack up in his favour this time

Irishman is in good form, totally focused and has prepared meticulously for Augusta 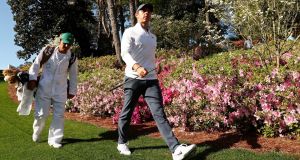 Rory McIlroy Ireland walks with caddie Harry Diamond during a practice round prior to the start of the 2018 Masters Tournament at Augusta National. Photo: Jamie Squire/Getty Images

The numbers game, add them up and all those digits can mean so many different things; just manipulated into whatever you want them to mean.

Rory McIlroy – the one man in the field able to complete the career Grand Slam at the Masters – knows the deal better than anyone.

Hint: that’s the number of times Ben Hogan and Sam Snead played in the Masters before they won. Another hint: This is McIlroy’s 10th Masters.

Hint: that’s the age that Arnold Palmer was when the legendary golfer won his breakthrough Masters. McIlroy is 28.

Hint: that’s the number of holes McIlroy played at Augusta National, over two separate visits, in the run-up to the tournament as part of his detailed preparations.

“There’s lots of different numbers you could throw around. Hogan and Snead on their 10th go. Arnold won his first Masters at 28. There’s a lot of different comparisons you could make. But it is all meaningless unless you go out there and actually do it.

“But I feel like I’ve been here long enough and I’ve played enough rounds around here to know how to play this golf course and well enough to win,” said McIlroy.

The ultimate numbers game, of course, comes down to whoever has the fewest 72 holes aggregate total. For McIlroy to achieve that, no stone has been left unturned, from his pre-tournament preparations and fine-tuning since getting here, to the equipment in his hands; to such an extent that Tiger Woods decided to get the same shafts in his driver and three-wood as McIlroy utilised in his stellar finish in winning the recent Arnold Palmer Invitational.

And with his putter proving to the trump card in dealing out his recent win in the Arnold Palmer Invitational, McIlroy decided it would be wise to touch base again with former tour player Brad Faxon.

But it wasn’t a traditional coach-player lesson that unfolded. Instead, they played nine holes last weekend at the Bears Club.

“We talked a little bit and had a chat, that was really it. It is more of a mindset thing rather than anything else. I feel like I’m sort of speaking to Bob Rotella through him a little bit because of how psychological it is,” explained McIlroy.

McIlroy has been diligent in his preparations. When they were here last week, playing 54-holes over two days, McIlroy felt it would be a good idea to have his caddie Harry Diamond – a former Irish amateur international – play the course rather than carry his bag so that he would see it through the eyes of a player.

Diamond was here, outside the ropes, as a spectator when McIlroy’s back nine meltdown in the final round in 2011 inflicted mental scars. Yet, it is that very experience, which saw him rebound with a win in the US Open just months later, that McIlroy identified as the experience that has helped form his resilience.

“I feel like it made me a better player. I feel like it made me a better person. It definitely was a character-builder. And it took me a while to get over it, but I knew if I looked at the big picture it would serve me well in the long run. I don’t think I would have had the career that I’ve had so far if it wasn’t for that day. It was very important. Any experience like that is a learning experience, and I have learned a lot from it and I have been able to get the wrongs right that happened,” said McIlroy.

Except, so far, McIlroy hasn’t yet had the opportunity he had then, when he went into the final round with a four-shot lead only to capitulate with his play of the 10th – triple bogey – providing the defining shell-shocked images of that tournament.

Since then, McIlroy has refocused his efforts and, although enjoying top-10 finishes in each of the past four years, has always found himself on the back foot after the opening rounds. Slow starts can, and more often than not do, prove to be handicaps that can’t be overcome.

“I just have never been close enough to the lead going into the last day to feel like I’ve got a real chance after that chance I had in 2011,” admitted McIlroy, “and that’s me being too comfortable with missing chances and not taking opportunities when they come around. [For example] hitting two great shots into 11 and miss the putt, but you walk away with a [par] four thinking that’s okay.

“But at the end of the day you had a realistic chance for birdie on a hole where you could gain a shot and a half on the field. So I think just being that little more aggressive , that little more efficient . . . there’s scores out there.”

Perhaps that more aggressive mindset has been helped by a different approach to this year’s Masters, one where he has played eight competitive tournaments including a win in Bay Hill.

“I come in here with one goal, and that is to win the tournament. I’m sure everyone playing the tournament has the same goals and objectives, and that’s all I’m trying to do. If I am under the radar or not, it doesn’t matter. I just need to go out and play good golf.”