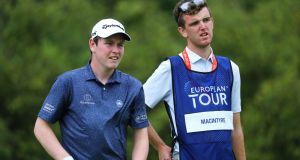 Robert MacIntyre wants to be as ruthless on the course as he has been off it after splitting from the caddie who aided his rise from the Challenge Tour to Scotland’s top-ranked player.

MacIntyre and Irishman Greg Milne worked together for more than two years as the left-hander graduated to the European Tour and earned rookie of the year honours in 2019, aided by a share of sixth in the British Open at Royal Portrush.

The 24-year-old ended the year ranked 64th in the world and started 2020 with a top-10 finish in Dubai, but has struggled to rediscover such form since golf returned from the Covid-19 lockdown and is hoping a new caddie is part of the solution.

“I just felt like the time was right,” MacIntyre said ahead of the €7million ASI Scottish Open at the Renaissance Club. “Me and Greg had a good two, two and a half years. We came from the Challenge Tour together and are still great mates.

“It was just the time was right to change. Not just for me but for Greg. The two of us were, I’d say almost stagnant in what we were doing.

“It’s not nice at all to do it. It’s one of the hardest decisions I’ve ever done in my life. But it’s my job and my business. If I don’t perform, I’ve not got a job, but Greg will always be able to pick up a bag.

“At the end of the day it’s my job that’s on the line, so I just felt like it was something that I needed to do to just try and take the next step.

“I’m at a level or a stage in my career that I can go two ways; you can either go back into the pack or you can take off and get into the top 50 in the world, top 30s. That’s obviously where I want to be.

“I don’t want to be just in a pack. I want to be a standout. I want to be up there competing in Majors. So that’s one of the reasons I’ve got Mikey [Thomson] on the bag.

“When things aren’t going well, you have to change something to try and get a different momentum, try and see a different angle on it.

“People see me as an easy-going guy, but I’m really ruthless when it comes to things. But I feel like the things that I’m doing, the people I’ve got in my team, that I’m doing the right things.

“Mikey, for instance, is a winner. He’s not scared to take on folk, and I feel like that’s perfect for me because I’m at a stage where that I need to push on and become ruthless when it comes to the crunch.”

Thomson has plenty of experience and caddied for four-time Major winner Brooks Koepka when the former world number one won the Scottish Hydro Challenge in 2013.

But he was working as a delivery driver when he – eventually – took the call from MacIntyre which resulted in a potentially lucrative change in career.

“He was doing delivery for a bakery, started at 3.00am, finished by midday,” MacIntyre explained. “Actually the first time I messaged him he didn’t get back to me. I messaged him maybe at nine at night, and then he replied midday the next day, like, ‘oh, sorry I was in bed’.”

1 Gerry Thornley: After 32 weeks the Six Nations is back up for grabs
2 Bennett girding his loins for impossibly unpredictable Vuelta
3 Stockdale and Ringrose on board with expansive Irish game plan
4 GAA expected to go ahead with championship under Level 5
5 Slaven Bilic hits out at €16.95 pay-per-view for West Brom’s draw with Burnley
Real news has value SUBSCRIBE

Extremes of sweet and sour for Solskjaer as Man United show signs of revival 09:35
Slaven Bilic hits out at €16.95 pay-per-view for West Brom’s draw with Burnley 08:31
Patrick Mahomes shines as Kansas City beat Buffalo Bills 08:14
Intercounty season to continue under Level 5; the state of play as Six Nations resumes 07:49
Different Strokes: ILGU conveyor belt churning out talent 06:30
Here is your handy guide to sport on television this week