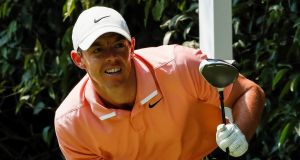 Rory McIlroy during his final round of the WGC Mexico Championship in Mexico City. Photograph: EPA/Jose Mendez

Even though Rory McIlroy has opted to take a week’s rest, deciding not to play this week’s PGA Tour stop, the Honda Classic at Palm Beach Gardens, the Northern Irish man will remain at world number one for at least another week.

That’s some consolation for McIlroy given his frustration after failing to close the deal in the WGC Mexico Championship, where a cold putter was primarily his undoing.

While the Honda Classic is very much a hometown event for him, McIlroy – who has finished 3rd-5th-5th in his three outings on the PGA Tour so far this year – will instead take “a week off” before returning to action at next week’s Arnold Palmer Invitational at Bay Hill. That will be followed by his defence of The Players at Sawgrass, before a further outing at the WGC-Dell Technologies Match Play two weeks later and finally the Valero Texas Open in a busy run-up to April’s US Masters.

For McIlroy, who’d led after the first round, another winless week led to further disappointment.

“I don’t feel like I got the best out of myself...I hit some loose shots, and I didn’t putt as well as I need to. I just let a few shots get away. I’m just looking forward to a week off, looking forward to getting away for a little bit.”

With McIlroy and Graeme McDowell deciding to leave the Honda Classic off their schedules moving into the Florida Swing of events – which also features the Arnold Palmer Invitational and the following week’s The Players – it is left to Shane Lowry and Pádraig Harrington, a past champion, to make a two-pronged Irish challenge at PGA National. Brooks Kopeka and Justin Rose, who bypassed Mexico, return to action.

Lowry’s tied-29th finish in Mexico saw him drop one place to 19th in the updated world rankings, and the Offalyman has included the Honda on his schedule for the first time since 2016.

James Sugrue, the British Amateur champion, has received a sponsor’s invitation to play in this week’s European Tour stop, the Oman Open in Muscat.

Sugrue performed well in recent amateur championships, and has been given the opportunity to take on the professionals as the European Tour’s second leg of its Middle East swing gets under way. The Corkman is taking advantage of such invitations as part of his preparations ahead of playing in the Masters. He also has an exemption into the US Open at Winged Foot in June, after which he plans to turn professional.

Sugrue is one of three Irish players in the field in Oman, where he will join Cormac Sharvin and Jonathan Caldwell in a field boosted by the inclusion of two-time Major champion Martin Kaymer.

The 35-year-old German has not managed a win on tour since lifting the US Open at Pinehurst in 2014. “I think as long as I follow a plan, winning again is just a matter of time. At the end of 2019, I sat down with my coach and we talked about the things that didn’t work out and the things that did, and I need to elevate my game.”

Kaymer started his season with a tied-eighth finish in the Abu Dhabi Championship, and has since posted back-to-back top-20s in Dubai and Saudi Arabia.

“I feel I’m really close because I have a plan now. The last two or three years, I didn’t really have a plan of what I wanted to do, where I wanted to be, or where I thought my golf should be.

“I changed a few things over the winter with my driving because I was never happy the way I drove the ball. It was straight, but it was never long enough to compete at the big events.”

Kevin Phelan can also look forward to a return to touring life again after the Waterford man earned his full card for the upcoming Asian Tour in finishing tied-23rd at Q-School in Thailand.

Ole Gunnar Solskjær takes pop at pundits over Donny van de Beek comments 16:16
Bernard Le Roux cleared to face Ireland on Saturday after disciplinary hearing 15:55
Johnny Sexton: ‘We just know we have to be a lot better in all areas on Saturday’ 15:43
Harrington keen on breaking her Breeders’ Cup duck at Keeneland 15:16
Neil Lennon brands criticism of Shane Duffy’s Celtic performances ‘hysterical’ 14:58
Here is your handy guide to sport on television this week