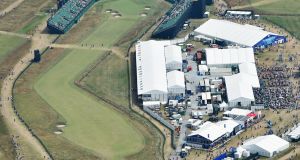 General aerial view of the 18th hole at Royal Liverpool Hoylake which will be extended to 600 yards for the 2020 British Open. Photograph: David Cannon/Getty

The 18th hole at Royal Liverpool will measure more than 600 yards for the 2022 British Open in one of a number of changes aimed at making the Hoylake course “future friendly”.

The news, which was released on the club’s website rather than through the R&A, comes just a fortnight after golf’s governing bodies stated their intention to break the “ever-increasing cycle of hitting distance”.

Two new tees will be added to the par-five 18th at Hoylake to produce a hole measuring 607 yards.

A new par-three of 139 yards will also be created, with players hitting to an elevated green – approximately on the same site as the current 15th tee – looking out to the Dee Estuary. This will become the 17th hole.

The other changes involve the front of the fourth green being raised to produce a flatter landing area, the seventh green being moved left to make way for a new tee complex at the eighth and a new run-off at the 13th green.

Royal Liverpool’s chairman of greens, Andrew Goodwin, said: “The decision to make changes to a course like Hoylake wasn’t taken lightly, but throughout the club’s 150-year history alterations have been made and Royal Liverpool has continued to evolve and improve, ensuring it remains a wonderful challenge for both amateur and elite professional golfers alike.

“The club is eager to remain a regular host of The Open. It attracts the world’s best players to Wirral and brings a huge economic benefit for the region.

“Of course, the many visitors we are delighted to welcome every year want to play the best courses in the country, and we believe the changes will make Hoylake even better.”

Johnnie Cole-Hamilton, executive director of championships at the R&A, said: “We are very much looking forward to returning to Hoylake for The Open in 2022 and the enhancements being made to the 17th and 18th holes will help to produce a thrilling and dramatic climax to the championship for players and spectators.”