‘After amazing 25-year run, Phil and I have mutually decided to go separate ways’ 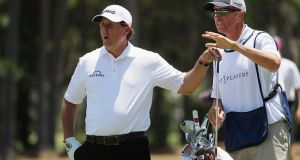 Phil Mickelson and his caddie Jim “Bones” Mackay during the second round of The Players Championship earlier this month. Photograph: Getty Images

After a quarter of a century together, Phil Mickelson and his caddie Jim “Bones” Mackay have mutually agreed to part ways.

The duo have worked together since 1992, in which time the 47-year old Mickelson has won five and competed in 11 Ryder Cups.

They released a surprise statement on Tuesday afternoon;

“After an amazing 25-year run, Phil and I have mutually decided to go our separate ways,” said Mackay.

“Player-caddie relationship don’t often last that long. I will always be grateful that I was around to witness so much of Phil’s career. When Phil hired me in 1992, I had one dream: To caddie in a Ryder Cup. Last year, at Hazeltine, Phil played in his 11th straight Ryder Cup. It was so cool to have a front row seat. I wish Phil nothing but the best. His game is still at an elite level, and when he wins in the future (definitely the Masters), I will be among the first to congratulate him.”

While Mickelson said; “After 25 very rewarding and memorable years, Bones and I have mutually decided to end our player-caddie relationship.

“Our decision is not based on a single incident. We just feel it’s the right time for a change. Bones is one of the most knowledgeable and dedicated caddies in the world. He is always prepared and has the ability to make decisions in pressure-packed situations. Bones is without a doubt one of the most thoughtful people that I have ever known. The next player to work with him will obviously be very lucky.”

Jack Charlton’s funeral to take place in Newcastle next Tuesday 16:04
Leinster’s clash with Saracens will open Champions Cup quarter-final weekend 14:49
GAA championship behind closed doors will be ‘the last resort’ 14:21
‘Everyone would play tomorrow if we could’ - Johann van Graan 13:36
My pay cut is no sacrifice in current climate, says England coach Eddie Jones 12:21
Here is your handy guide to sport on television this week