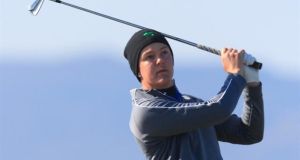 John Ross Galbraith continued his recent good form with four sub-par rounds at the home of golf as he finished runner-up at the St Andrews Links Trophy.

Royal Liverpool’s Matthew Jordan outlasted Ireland’s John Ross Galbraith to win the St Andrews Links Trophy by a single stroke over the Old Course at St Andrews. The pair were deadlocked in the lead after the third round at nine-under 207.

Jordan just edged out Galbraith with scores of 70, 68, 69 and 70 for an 11-under final total of 277. Galbraith finished one shot behind in second place with scores of 66, 71, 70 and 71 for 278 with Australian Ben Ferguson a further stroke back in third after a dramatic finish.

Helped by covering the first seven holes in the final round in four-under, Jordan was four shots clear on the 17th fairway before finishing bogey-bogey, three-putting the last from near the back of the green. Ferguson then birdied the 16th and 17th to get within one only to drop a shot at the last when he needed a three to force a play-off. Galbraith required an eagle at the last but had to settle for a birdie.

He’s not in the Britain & Ireland squad for the Walker Cup in Los Angeles in September, but more of the same over the next few weeks, starting in the Amateur Championship in Kent next week, and he’ll definitely be a contender for Craig Watson’s 10-strong side.

Eanna Griffin from West Waterford won the Connacht Strokeplay Championship at Athlone Golf Club with a two shots victory over Ross Kelly from Tuam and Jonathan Kelly from Lahinch.

Griffin set up victory with an excellent one under par third round of 71 after opening rounds of 75 and 72 and despite dropping five shots in six holes a final round 77 saw him home by two. Kelly with rounds of 74, 75, 76 and the only player to equal par in the last round shared second place with Keane, the halfway leader (72, 72, 78, 75) on 297.

The USA regained the Palmer Cup as they cruised to a 19.5-10.5 victory over Europe at Atlanta Athletic Club in Johns Creek, Georgia. The home team dominated the second day singles with a stunning 9.5 out of 10 points to enter the final day with a 14.5-5.5 lead. All the Americans had to do was earn one point in Sunday singles to close out the match.

No problem. Norman Xiong crushed Harry Hall 8 and 7 in the first match out to secure the cup for the U.S. From there, it just came down to how much the home team would win by.

That was five points for the U.S.A with Europe matching that with wins from Viktor Hovland who defeated Jimmy Stanger 3 and 2, Kristoffer Ventura who beat Sam Burns and Fredrik Nilehn who got the better of Collin Morikawa, both by 2 and 1 margins. Richard Mansell scored a 2-hole win over John Coultas, and Hannes Ronneblad was a 2 and-1 winner over Chandler Phillips.

This was the last Arnold Palmer Cup in its current format. Starting in 2018, the competition will shift to USA versus an Internationals squad, with each team having 12 male and 12 female golfers. Next year’s matches will take place at Evian Resort Golf Club in France.

Kevin Le Blanc from The Island has turned professional and will make his debut on the PGA Europro Tour in two week’s time when he tees it up in the PDC Golf Championship at Studley Wood near Oxford from June 21th-23rd.

A member of the Irish senior panel, Le Blanc made his international debut in the European Nations Cup at Sotogrande in March before going on to play for the GUI in the recent Carey Cup victory of the MGA at Galway Bay. He played for one year for Maynooth University under the Paddy Harrington Scholarship scheme but now hopes to forge a successful professional career.

“It’s exciting,” Le Blanc said “I just want to go pro while I’m young. You could get caught up playing amateur golf for a long time but I just want to get out now and get experience and see where it takes me.”

Le Blanc has no set schedule just yet but hopes to receive several more invitations to play in Europro Tour events. “I will keep my fingers crossed and see how it goes,” he said. “I just want to play as many as I can, get as much experience as I can and have fun.”

Duke University’s Leona Maguire has won the 2017 ANNIKA Award, which honours the most outstanding female Division I collegiate golfer as voted on by her peers, coaches and golf media.

“This award is a huge honour for me and to win it for the second time is a very special feeling,” said Maguire. “To win an award that Annika has put her name to and that is voted on by my fellow coaches, competitors and the media. It is a very unique award and something I am very, very proud to get the opportunity to win the award again.”

Maguire collected the second-lowest stroke average in NCAA history this season with a 70.29 ledger. It was the lowest since Lorena Ochoa collected a 70.13 stroke average in the 2002 campaign. Maguire broke her own Duke and ACC record from her freshman campaign of 70.78.

Over 10 events in 2016-17, Maguire registered eight top five placements, three victories, nine rounds in the 60s and 21 rounds of even or under par. She finished no lower than tied sixth over the course of the season. Maguire won the ACC Individual Championship, while helping the Blue Devils claim Duke’s 20th ACC title in school history. She finished runner-up at the NCAA Championship, won the LSU Tiger Golf Classic and the Northrop Grumman Regional Challenge. Maguire also placed tied sixth at the NCAA Albuquerque Regional.

On a very testing day for golf with heavy showers and sunny intervals at a minimum Killiney’s Nigel Duke came from one stroke back overnight to win the Connacht Seniors title at Claremorris Golf Club.

Duke carded a second round 74 to go with his opening 75 for a final total of 149 and with it a one stroke winning margin over Cork’s Tom Cleary who carded a best of the day level par 73.

Chris Hurst (formerly of Castlebar) and now residing in the UK took third place overall and also with it the ‘Fred Perry’ Cup as Connacht Veteran Champion for 2017 (Over 65s) with rounds of 74 and 77 for 151 with Martin Darcy from Tullamore fourth on 153 (76 77).

Jordanstown’s Stephanie Meadow will join Leona Maguire in next month’s US Women’s Open at Trump National after she came through a playoff to win one of three spots in Sectional Qualifying at Hidden Creek Golf Club in New Jersey.

Meadow opened with a one under 71 then added five birdies in a three-under 69 to finish tied for third in the race for just three places in the field at Trump National in Bedminster, New Jersey from July 13th-16th.

She was tied with Jacqueline Stoelting and Katherine Kirk on three under par but came through with a birdie at the second playoff hole .She will be hoping for a similar performance to her debut in the event in 2014, when she was third behind Michelle Wie at Pinehurst No. 2.

World amateur number one Maguire was already exempt for this year’s US Women’s Open and has accepted an invitation to remain in the US to play in the LPGA Tour’s Marathon Classic from July 20th-23rd.