Leona Maguire continues to go from strength to strength 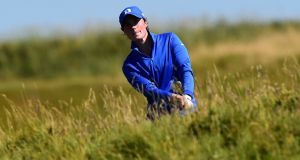 Predictions are best left to Nostradamus or those fortune tellers you find down sidestreets. Let’s just say that you don’t need a crystal ball or tarot cards to realise just where Leona Maguire is headed, her win in the British Women’s Amateur Open at Pyle and Kenfig on the south Wales coast the latest accomplishment in providing evidence of how good she truly is.

The 22-year-old from Co Cavan is unquestionably the dominant player in women’s amateur golf; and, in this case, the world amateur rankings don’t lie: Maguire’s first stint as number one, from May 2015 to May 2016 lasted exactly 52 weeks, and her second spell knows no signs of stopping any time soon. It started in August 2016 and has now stretched to 47 weeks, a total of 99 weeks in her amateur career.

To put this in perspective, only Lydia Ko - a two-time Major champion and a 14-time winner on the LPGA circuit since turning professional - has enjoyed a longer stretch as world amateur number one. The Kiwi’s spell amounted to a total of 130 weeks. Nobody else came close. Not Minjee Lee. Not Brooke Henderson. Only Maguire, who looks set to remain in the hot seat for the foreseeable future and very likely break Ko’s record.

The immediate future for Maguire will see her tee it up (as an amateur) against the professionals in the upcoming US Women’s Open at Trump National in New Jersey next month and also the British Women’s Open at Kingsbarns in Scotland in August. There will also be sponsors’ invitations to play in events on the LPGA Tour, as well as her own amateur schedule which includes the Vagliano Trophy match in Bogogno in Italy later this month.

It is what will happen after she finishes dominating the amateur game that is truly exciting, for when Maguire completes her degree at Duke University in North Carolina next May, the natural progression will be to turn professional. That is in less than a year’s time, and it is a move that will make her a global name.

It is worth looking at her predecessors as world amateur number one and what they achieved - so far - in the pro game. Ko has won two Majors, the Evian Championship in 2015 and the ANA Inspiration last year, and has 25 wins globally on the professional circuit. Minjee Lee has three LPGA Tour wins. Brooke Henderson is a three-time winner on the LPGA Tour.

Maguire’s record in the amateur ranks would suggest she has the pedigree to do the same, and - perhaps - more.