Out of Bounds: US Open field look to Holy Hill for inspiration 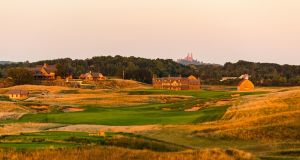 “You’d want a good reason to live out here, wouldn’t you?” said one of my colleagues on the bus as we worked our way along what were country roads out towards Erin Hills, host to this 117th US Open championship.

Looking out of the bus window, the rain teeming down from blackened skies, the view was of farmland and giant hay barns and lovely houses that would fit happily into any suburb.

Then, the signposts caught our eye. Cork Road. O’Leary Court. And, in fact, the road names are basically a map of Ireland with Dublin Road, Donegal Road, Limerick Lane, Clare Lane and more, many more, an integral part of this part of the Wisconsin landscape.

it would not be out of place in Rome or Assisi

Yet, when you get to the place where the quest for the US Open trophy will be fought out, the most imposing sight of all looking from the golf course that is that of the basilica atop what is known as Holy Hill.

Its full name is The Basilica of the National Shrine of Mary Help of Christians and it would not be out of place in Rome or Assisi. But it is here, in the middle of nowhere, built atop a drumlin, and it is a sight to behold even from afar.

In fact, its draw is such that some 500,000 tourist pilgrims a year visit the sacred place.

How such a building came to be built on Holy Hill in the town of Erin in the state of Wisconsin is an interesting one. One story has it that, in the 1860s, a French man called Francois Soubrio left his homeland after murdering someone. In his extensive travels, he found an old diary and map dating to the 1600s that featured a high hill that drew him to Wisconsin where he lived a hermit’s life on the hill.

An extension of the story is that the land where Soubrio settled for his austere existence was also inhabited by Native Americans, who had their own legend telling of a black-cloaked chief visiting in the past.

And, finally, there is the addition of the Irish settlers who arrived and also considered it a special spiritual place of prayer.

So, it was on that hill that a log chapel was first built on the highest part of the Kettle Moraine, a ridge formed from the deposits of a melted glacier.

According to the basilica’s website, a building plan was put in play in 1879 for the construction of what has evolved into the shrine which is home to stained glass windows, ornate paintings and statues in its chapel and main sanctuary.

And, to be honest, all of us looking towards the basilica can do with some kind of divine inspiration in nominating a winner at this US Open on a course that is an unknown quantity. It is certainly not your typical USGA setup, although - as Rory McIlroy confessed - it will particularly suit those whose driver is the weapon of choice in their bag.

Dustin Johnson - a new dad of just a couple of days - is favourite at odds of 13/2; McIlroy, a lightly-raced player this year, is 12/1 alongside Jordan Spieth, while Jason Day is 14/1 and Jon Rahm is 18/1. All fit the bill in terms of driving. However, Brooks Koepka at 40/1 also boasts that ability to drive the ball long and straight and could be the value bet, while Kevin Chappell - at 66/1 - is worth an each-way look.