Out of Bounds: who'll emulate Kitayama and will they be Irish? 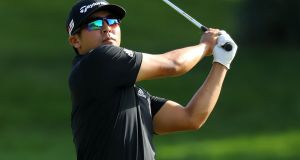 Kurt Kitayama is one of the six players who successfully retained their cards in 2019, and he did so in some style. Photograph: Warren Little/Getty Images

Back in the day, Philip Walton used to refer to a visit to the European Tour’s Final Qualifying School as akin to invitation to a “torture chamber,” such were the physical and mental exertions which players playing for their cards endured.

Things haven’t changed any, and those 156 players involved in this week’s latest examination starting Friday- at Lumine in Spain, where the Lakes and the Hills courses will alternate the demands for the first four rounds before the Lakes alone decides the outcome - will entertain hope and trepidation in their respective quests. The number crunching will ultimately see a minimum of 25 players claim tour cards.

The ticket onto the main stage provides an opportunity to advance careers, but - if we’re entirely honest - there is no guarantee of anything.

Indeed, a look back at last year’s graduates from Q-School serves as a timely indicator of how the journey onward can be smooth for some and rocky for others.

Of the 27 players who successfully acquired full tour cards 12 months ago, six managed to retain them when the cut fell in the Race to Dubai order of merit after the recent Portugal Masters. On the flip side, 21 of those who left Lumine with the precious exemption a year ago failed to retain their cards.

The success rate in effect was 22 percent: such is the black and white picture, the stark reality, of how tough survival is on the main circuit.

On a positive note, the six players who successfully retained their cards in 2019 did so in some style. Zander Lombard, Jeff Winther, Roman Langasque, Masahiro Kawamura, Kurt Kitayama and Guido Migliozzi were all comfortably inside the cutline, with two of them standout performers through the year: Kitayama won twice, claiming the Mauritius Open and the Oman Open, while Migliozzi was also a two-time winner, with victories in the Kenya Open and the Belgian Knockout.

Kitayama, indeed, is very much in contention for the Rookie of the Year honours on the European Tour, currently 11th on the Race to Dubai rankings. Apart from his two wins on tour this season (the fastest player to two wins in European Tour history, winning the Oman Open in his 11th start) , the 26-year-old American was also one of those six players involved in the play-off in Turkey on Sunday, so his season’s work features two wins and three other top-five finishes.

Who will emulate Kitayama? Someone will emerge from the packed field to move into the spotlight on the main stage. Maybe one of the Irish?

Six of them are involved in the latest Q-School examination. Michael Hoey, Jonathan Caldwell, Niall Kearney, Gavin Moynihan, Paul Dunne and Robin Dawson know they will have to do it the hard way to get that precious ticket to a full tour card.

Seán Moran: Fallout from Tyrone final celebrations will concern GAA 06:45
Eric McNamara hoping Internal Transfer can get the deal done in Kerry National 06:00
Sporting Upsets: The summer that London tore up the script of two and out 06:00
How Dundalk’s opponents Sheriff started on the wrong side of the law 06:00
Pro14 teams need private planes to keep show on the road 06:00
Here is your handy guide to sport on television this week