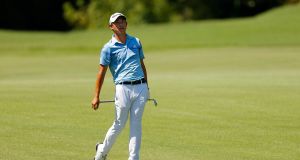 The American novelist Mark Twain is wrongly attributed with coming up with that old putdown on golf, that it is nothing more than a good walk spoiled. One quote, however, which can correctly be credited to Twain relates to age. Of which he said, “Age is an issue of mind over matter. If you don’t mind, it doesn’t matter.”

And, it would seem, a generation of young bucks on the professional circuit are living out those words. Where once upon a time, it was rare rather than the norm for a young player to hit the ground running – think Jack Nicklaus, then Tiger Woods and Phil Mickelson, and Rory McIlroy – there has been a rather jam-packed conveyor belt of late.

Indeed, there is a fascinating generation game in play at present. Think about it. The likes of Justin Thomas (27), Bryson DeChambeau (26), Jon Rahm (25) and Xander Schauffele (26) are only in their mid-20s and, yet, another stream of even younger players are moving into the upper echelons of the world rankings proving that youth is an attribute in itself.

Collin Morikawa’s win in last month’s US PGA at Harding Park saw him become the third youngest winner of the Wanamaker Trophy since it became a strokeplay championship in 1958. The two younger? Well, that would be Nicklaus, the all-timer career Major winner with 18 titles, and McIlroy.

Morikawa, who is 23, is part of a group in their early-20s who have moved into the professional game with no fear. Viktor Hovland, the 22-year-old Norwegian, is another. So too Sungjae Im, the 22-year-old Korean. Scottie Scheffler, 24, has posted a 59 on tour. Matthew Wolff, at 21, possesses his own unique swing with an abundance of self-confidence.

On turning professional in June of last year, Wolff – not just talking for himself but also including Morikawa and Hovland in his words – remarked: “I believe that we can be the best players in the world. I believe that in myself and I think that’s the most important thing.” That was at the Travelers in June 2019 and within weeks he was lifting his breakthrough tour win, in the 3M tournament.

Yet, of them all, Morikawa is the one to have let his clubs do the talking more than any of the other young bucks. Of Japanese (on his dad’s side) and Chinese (on his mother’s side) heritage, the Californian – who finished his business degree before turning professional – has brought a maturity seemingly beyond his years onto the scene and credited Justin Thomas with providing advice to make the transition so much easier.

After the shutdown due to Covid-19, Morikawa beat his friend Thomas in sudden death to win the Workday Open

In fact, it was in a dinner conversation early-on in his professional career that Thomas related the early travails of Justin Rose, who missed 21 consecutive cuts at the start of his tour career. The message was clear to Morikawa, that life on tour “is a long journey . . . we’re not just here to play for a couple of years, we’re here for a lifetime. This is what we love to do. That’s the best advice I’ve gotten so far.”

Morikawa’s journey has seen him off to a quick starter, probably even quicker than he could have envisaged. He made his professional debut at the Canadian Open in 2019, finished second to Wolff at that 3M tournament and a few weeks later won the Barracuda Championship. On the PGA Tour’s resumption in July after the shutdown due to Covid-19, Morikawa beat his friend Thomas in sudden death to win the Workday Open and, within weeks, added the Wanamaker Trophy as PGA champion to his cabinet.

So it is that Morikawa heads to next week’s US Open at Winged Foot as the young gun seeking back-to-back Major wins. Yet, that mature outlook is again reflected in his approach which is of seeing a bigger picture. As he put it, “The Majors are going to be circled in, just like everyone else, but I’ve got to focus on every single week.

“I’m trying to win every single week. I’m not trying to come out and just win the Majors. I’m 23. This is my first full year, (not) even a full year with everything going on. I just love being part of it, just being able to come out and play with a bunch of guys that love the sport too.”

That love of the game, of competing, would seem to be a key driving sport for this band of young players. As Hovland remarked on making his breakthrough with his win in the Puerto Rico Open earlier in the season, “I want to join that group (of tour winners alongside Wolf and Morikawa), but all the expectations and the pressure comes from myself.

“I want to perform because there’s no fun showing up trying to just make the cut or do whatever. I just want to try and stay within myself and stay in the present and try to get better every day.”

Indeed, that work ethic is apparent in each of their upward trajectories. Im, for one, experimented with his backswing so that now his slow, slow take-back is an integral part of who he is, while Scheffler, still seeking that first win, remarked: “I’m extremely competitive what works for me is just focusing week-to-week. When I’m home, I’m never not motivated to practice.”

And one thing which these young bucks have in common with those who set past records is that motivation to practice, to, as Ben Hogan once put it, “dig it out of the dirt.”

Take 5: The new stars of golf

2017 winner Ostapenko returning to form in French Open 14:15
Oisin Murphy denies taking cocaine after failed drugs test in France 13:55
Manu Tuilagi out for six months with a torn achilles 12:58
Jacob Stockdale named at 15 as Ulster go again in Pro14 12:37
Johnny Sexton captains Leinster against the Dragons 13:25
Here is your handy guide to sport on television this week