Brutal Winged Foot can show its teeth again, just like 2006 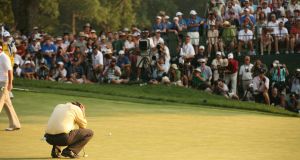 Phil Mickelson at the 18th hole in the 2006 US Open. Photograph: Darren Carroll/Icon SMI/Icon Sport Media via Getty Images

To see what lies ahead at the US Open at Winged Foot, it is worth going back in time, to the 2006 championship, where the course’s 18th hole – a par-4 dogleg left of 469 yards – proved instrumental as a card-wrecker to the aspirations of a number of players, with Geoff Ogilvy ultimately lifting the trophy.

It was the one that got away for many, with Colin Montgomerie, Phil Mickelson, Jim Furyk and Pádraig Harrington all left to rue their play of the closing hole.

Monty’s self-destruct button came with a change of mind over what club to play from the middle of the fairway. The Scot and caddie Alastair McLean spent some time discussing club selection. Originally, Montgomerie had a six-iron in hand, but he figured the adrenalin would add 10 yards so switched to a seven. His shot came up short, and he then pitched and three-putted for a double bogey to lose out by one stroke.

Typical of Furyk, he found the fairway off the tee. But untypically, his approach shot was pulled left into a greenside bunker. He pitched out, and missed the par save. He, too, finished a stroke shy of Ogilvy.

Mickelson held a one-stroke lead on the 18th tee. To the incredulity of many observers, Lefty reached for the driver which had been erratic for much of the round. He pulled it left, where a tree blocked his sightline: from 201 yards, he attempted to cut a three-iron, but the ball smacked into the tree and moved barely 25 yards into thick rough. His attempted recovery finished in a fried-egg lie in the bunker and he ran up a double-bogey six, failing – once again – to win the only major that has not yet found a way onto his CV. “I can’t believe I did that, I am such an idiot,” he said of his play of the 18th.

And what of Harrington? The Dubliner had triple-bogeyed the 18th in his third round, but had remained bogey-free through 15 holes of his final round to get into the heat of battle. Then, he bogeyed the 16th, 17th . . . and 18th, where, chasing a birdie, his approach shot flew the green. In all, he dropped four shots to the hole over the weekend, and finished two shots shy of Ogilvy.

The switch in dates for the US Open from June to September will make for a different kind of course set-up, but Jon Rahm – on a recent reconnaissance visit to the famed AW Tillinghast course which has stood the test of time – remarked of the anticipated challenge: “I’m not shocked that the winning score last time [the US Open was played here, in 2006] was five-over par. I don’t see any of us shooting under par; or, if we [do], it would be somebody winning by a lot.”

In other words, expect more drama.

1 Gordon D’Arcy: Saracens showed again they have the template of how to beat Leinster
2 A kick in the teeth for sports, and a nail in the coffin for communities
3 What next for green jersey hero Sam Bennett after toughest of Tours?
4 Born to ride, born to win: Sam Bennett, the making of a green machine
5 Saracens’ Michael Rhodes cleared of headbutting Leinster’s Robbie Henshaw
Real news has value SUBSCRIBE