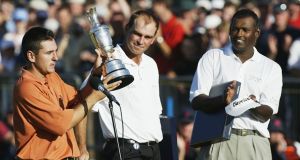 You’ve got to remember that, when the British Open was staged at Royal St George’s in 2003, Tiger Woods was at the height of his powers.

His was the name on everyone’s lips, seemingly unburdened by the weight of expectations shouldered week-in and week-out on the tour. Indeed, by the time the 132nd staging of the old championship came to Sandwich, Woods had already won four times that season. The week had been long pencilled into his itinerary, as ever with a sense of expectation when it came to teeing up in a Major.

In some marked contrast, Ben Curtis had never really factored the British Open into his scheduling. In fact, he’d never played in a Major championship in a professional career that had started three years earlier on the Hooters Tour and, having secured the 26th card at Q-School in late 2002, his rookie season on the PGA Tour had, for the most part, proven fairly unspectacular.

A turning point came two weeks ahead of the British Open at Sandwich. Curtis claimed his first top-25 finish of the season, a tied-13th place finish in the Western Open where Woods eased his way to the win, and that career-best finish earned the 26-year-old an exemption into the British Open. His travel plans were pretty much of a lastminute.com nature, with Curtis and his fiancée Candace also seeing it as an opportunity to do some sightseeing in London.

Apart from the cottage which his management team managed to find near the course, one other thing needed sorting. Curtis needed a caddie. As it happened, Andy Sutton, who knew the courses around the Kent coast like the back of his hand, was on the lookout for a bag.

Sutton was an experienced caddie on the European Tour but his player, John Bickerton, had not managed to qualify. “I really wanted some work at Sandwich. I lived up the road in Maidstone, so I fancied working and being able to sleep in my own bed,” recalled Sutton, who picked up the phone and called IMG, wondering if there were any of the management company’s players looking for a caddie.

“Can you get me a bag?” I asked. “They said they had a guy coming over from America called Ben Curtis. I’d never heard of him.”

Curtis had started the year ranked 1,269th in the world rankings. Some decent play in his rookie season on the PGA Tour had seen him work his way up to 396th by the time he got to the British Open. To provide some context, that is the position currently held in the rankings by a Spaniard named Nacho Elvira.

The bookmakers, not surprisingly, had Curtis tailed towards the bottom of the market, with odds up to 500/1 available for anyone scouring the outsiders.

As ever, Woods was the red hot favourite going into the championship. He was favourite everywhere he went back then. But the week held some expectations too of the Irish. Pádraig Harrington was ranked ninth in the world and regularly quizzed about if he’d ever break his Major duck; while Darren Clarke, ranked 17th in the world, was a WGC winner and, considered a links specialist, and was always among those names on people’s lips whenever the week of the British Open came around.

That week, indeed, Clarke’s own high expectations of himself were demonstrated not by what he said but by what he didn’t say in the days running up to the championship. He became media shy, to suit his own needs, spending time on the driving range and stubbornly failing to make eye contact with us golfing hacks who were left waiting in vain for any words.

Interestingly, it was Harrington, in the days running up to the championship, who fired a warning that it would be unwise to limit the list of potential champions to the usual suspects, especially on a links as quirky as Royal St George’s.

Harrington observed: “All players who are here are capable of playing good golf now, they should know how to get a ball around . . . somebody going out there swinging great might play worse or score worse than somebody who is hitting the ball poorly but who uses his head around the course . . . I can’t see why it would exclude anybody.”

Curtis’s grandfather had built a public course in Ohio and he had grown up with the game. But he was one of those players who had never experienced links golf before and the American got to Sandwich on the weekend before the British Open, where he met up with Sutton, walked the links, and then played 18 holes on the Saturday and Sunday. He then spent the Monday in London sightseeing before getting back to work on the Tuesday.

Hennie Otto, a South African, shot a three-under-par 68 to take the first round lead ahead of heavyweights Greg Norman and Davis Love III. Curtis opened with a 72. On day two, Love claimed the midway lead, on one-under, two shots ahead of Thomas Bjorn. Curtis again shot 72, to move up to tied-fourth, three shots adrift. Few noticed his presence on a jam-packed leaderboard, with Sergio Garcia and Tiger Woods among those lurking with menace.

After the third round, Curtis continued to hang around the business part of the leaderboard. He was in illustrious company. Bjorn held the 54-hole lead on one-under, a shot ahead of Love. Curtis was in tied-third place alongside Woods, Garcia, Vijay Singh and Kenny Perry. But, as the last man to hand in his card, he avoided having any of those big names for company in the final round. Instead, he was paired with Phillip Price on the last day.

Mark Roe, too, would have been in that group on one-over, only to be disqualified – after a third round 67 – when it emerged he and Jesper Parnevik had failed to exchange cards on the first tee (that rule has subsequently changed).

Indeed, that final round draw proved to be to Curtis’s benefit. As he would recall, “One thing that did help me (was) that I was playing with a guy I had never even heard of in Phillip Price. There were so many big names – Tiger, Vijay, Davis Love III – that we were the lost group out there among all these great players. It was a case of, ‘who are these guys?’”

The bookies, it appeared, also agreed with Curtis’s anonymity when it came to identifying the winner. Even as he headed out for the final round, two shots behind Bjorn, he was rated no less than a 50/1 chance. If anyone was looking beyond Bjorn, it was mostly to the lurking presence of Woods.

The Sandwich links proved to be at its most cantankerous as the day unfolded. Woods’s putter went cold. Love found no love. Curtis showed no fear in his play of the first 11 holes, claiming six birdies to move into a two stroke lead, only for reality to bite and to drop four shots in the following six holes to fall two behind and, even as he gamely sank a 10-footer on the last to save par, it was in the belief that it might get him second or third place.

One of the safest places to be on the Sunday of an British Open is to be in the clubhouse with the work done, and Curtis’s 69 for 283, one-under, gave him a strong hand. It appeared that Bjorn, though, held a stronger one: the Dane had a three stroke lead with four holes to play. A bogey on 15 was followed by calamity on the 16th, where he twice saw his ball trundle back to his feet from a greenside bunker as he ran up a double-bogey. Another bogey on the 17th poured salt on the wound.

Curtis was out on the practice ground, preparing for a possible play-off, when Sutton did a version of Usain Bolt in racing across the range to tell him he was the newest custodian of the Claret Jug. In his very first Major, Curtis was the unlikely one to seal the deal. “I was shaking in my boots, obviously, but I was just out there very focused on what I had to do and let my work speak for itself,” he said.