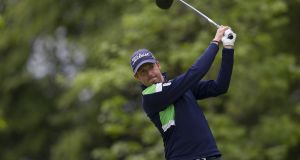 Simon Thornton: ‘As soon as I hit it I thought it was in, to be honest.’ Photograph: Patrick Bolger/Getty Images

The guttural roar came from the innermost part of his being. With the dark clouds spitting out rain, Simon Thornton found his own light. The 43-year-old produced as fine a finish as you’d see, as he rolled a 35-footer from off the first green – the ball working its way from left to right down the hill and easing against the flagstick before dropping into the tin cup – to defeat Colm Moriarty at the first hole of sudden-death to claim the Irish PGA Championship at Roganstown Hotel & Country Club in north Co Dublin.

Thornton had eyed the ball all the way, holding his breath, and then greeting the ball’s disappearance with a lone roar. For Moriarty, there was the feeling, momentarily, of putting himself into the shoes of Dustin Johnson the other night when Jon Rahm had delivered his knockout blow. In fairness to Moriarty, the words which escaped his lips offered congratulations. “Good shot,” said the man denied at the death.

The two men, familiar adversaries going back to their times on the professional circuit, Thornton shifting his time in those days between the European and Challenge Tours, Moriarty mainly on the Challenge Tour, had finished level on two-under-par 140 after the weather-shortened 36-holes championship. Thornton – with a birdie on the 18th – shot a second round 70, while Moriarty signed for a 72.

In truth, their shot-making, and especially the dramatic finish, deserved an audience which, in this Covid-19 world, was denied them.

“I was looking at Twitter for the first tee shots from [the Northern Ireland Open] at Galgorm and nothing, nobody standing around,” observed Thornton of how restrictions had impacted on tournaments. “And, even here, there would have been a wee gaggle of people around. It is just a shame, this is a great place, a great golf course.”

Thornton and Moriarty finished a shot clear of Clontarf’s Eoin O’Brien, who was left to rue a double-bogey six on the 15th, as he closed out with a 70 for 141, while veteran Jimmy Bolger and Neil O’Briain finished tied-fourth on 142.

Thornton’s win – his third Irish PGA success, following on from his victory at Seapoint in 2013 and at Galway Bay in 2018 – was certainly one to savour, for he had been in two minds only a week ago on whether to play the national championship or commit to the Northern Ireland Open on the Challenge Tour. “I was humming and hawing. I made a good choice,” admitted Thornton, who won the dual-badge St Omer Open on the European Tour in 2013 when he defeated South African Tjaart van der Walt in a play-off.

Thornton’s earned his place in this latest play-off with a birdie on the 18th, although he was unaware of the significance of that up-and-down finish on the par-5 closing hole. “I knew I needed a birdie to get back under par for the day. I knew Colm was staying all right. I got word nobody had run away with it, but I hadn’t a clue what the scores were.”

Anyway, that birdie proved vital. In the three-ball behind, Moriarty too was somewhat in the dark, unaware that Thornton had birdied to draw level. In his play of the par 5, Moriarty’s second shot found a fairway bunker and his approach then came up short of the green. The Glasson-attached professional chipped short of the flag, for a tap-in par.

“I hadn’t holed a putt all day, the longest was maybe six feet, so I knew I was due one because I am a good putter. As soon as I hit it I thought it was in, to be honest,” he said.