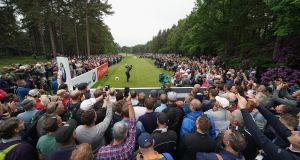 Huge crowds surround the 12th tee as Rory McIlroy drives during the second round of the BMW PGA Championship at Wentworth. Photograph: Richard Heathcote/Getty Images

Another day returned another Rory McIlroy milestone at Wentworth. After the Northern Irishman had produced his finest opening round at the PGA Championship, he recorded a 65 on day two, playing the West Course bogey-free for the first time.

McIlroy denied his charge to the top of the leaderboard – where he sits at 12 under par – would turn heads among fellow competitors. The reality is different. The former world No 1 in this touch remains a seriously imposing figure. Alex Noren, who played alongside him, said he felt like “quitting golf” after watching the ease with which the 29-year-old produced seven birdies. “That’s the best round I’ve ever seen,” the Swede said.

Just don’t suggest to the man himself that a second success at this event is inevitable from here or, even, that he expects it. “Jeez, no,” McIlroy stressed. “I could shoot two 65s over the weekend and still not win.

Explanation for McIlroy’s upturn in fortunes has many facets. “I love this place,” is clearly one. Another requires the context of 2017, when injury prevented the four-times Major champion from ironing out any swing flaws when they arose. After a poor Players Championship earlier this month, off-course work is paying dividends.

“It’s great now knowing I can go and hit balls all day to work on things, you take that and your fitness for granted [before an injury],” McIlroy said. “It all feeds into your confidence, and there was a bit of a flow going on in the back nine. I was hitting good shots, good putts and got a little bit of momentum that went with me. I’ve done some good work over the last week and it’s started to pay off. It’s nice to see that bear fruit on the golf course already.

“I still feel like there’s a bit of work to do. There were a couple of loose ones out there, so it’s still not 100 per cent where I want it, but it’s getting there. It’s going in the right direction.”

McIlroy confirmed he had stopped working with the putting guru Phil Kenyon, with a view to “keeping ownership” of his work on the greens. For all coaching in golf is inevitable, McIlroy is far too much of a natural artist to be bogged down by statistics and instruction.

The marquee moment of his Friday round was a converted birdie putt from 50 feet on the 15th. Proof, however, of McIlroy’s point regarding scope for improvement can be found in the fact he has played the closing two holes – both generous par fives – in even par over two days.

England’s Sam Horsfield emerged from the pack to chase McIlroy. The 21-year-old’s second round of 68 moved him to minus nine. This marks a debut in the tournament for the long-time protege of Ian Poulter. “Any time you’re playing on the weekend and you’re up there near Rory, I think you’re going to be doing pretty well,” said Horsfield. “This golf course is really good for me. I like the way it is.”

The 2010 US Open champion Graeme McDowell sits at minus six after adding a 67 to Thursday’s 71, while Shane Lowry is on four under after he carded a 71 in the morning.

Paul Dunne missed the cut after a three-over 75 pushed him out to two over, while Pádraig Harrington was two shots further back after 70 failed to make him up enough ground after an opening 78.

Poulter was joining the early exodus on the 16th tee. The Houston Open champion then responded in typical style; three birdies in his closing three holes leaving him on three under par and comfortably among those surviving for the weekend.

One of Poulter’s playing partners, Tommy Fleetwood, made a late Friday surge. His 66 means an aggregate of eight under par. Logic would suggest he will be McIlroy’s greatest threat.

“Who knows what Rory is going to do?” said Fleetwood, who won Europe’s money-list title last season. “Obviously he’s the one that everybody is going to be looking at and he’s the one that’s got the lead. I might go out and play terrible tomorrow but I’ll be trying my heart out.” - Guardian service

All-Ireland League still on ice as clubs try to keep the fire burning 06:00
A man before his time – Hain’s heroic role in the history of anti-racist politics 06:00
Matt Williams: A Lions tour in a raging pandemic would be more than folly 06:00
Dublin’s James McCarthy goes back to basics with the same golden result 06:00
Argument for playing on still stands – even if optics are poor 06:00
Here is your handy guide to sport on television this week