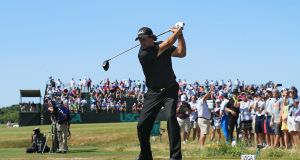 Phil Mickelson plays his shot from the eighth tee during the final round of the 2018 U.S. Open at Shinnecock Hills. P hotograph: Andrew Redington/Getty

There was no act of contrition from Phil Mickelson, who – once again – fulfilled the role of the people’s champion after he signed his final round scorecard to signal yet another US Open title had evaded him: no final piece of the career Grand Slam for Lefty, who left his mark on the championship for all the wrong reasons.

A swipe at a moving ball on the 13th green, which made contact and sent it back in the direction it had come, during Saturday’s third round, served to deprive St Phil of his holier than thou persona.

The bold boy wasn’t told to leave the premises however, as his actions were construed by the powers-that-be as worthy of a two-stroke penalty but not of disqualification. The golfing rulebook is a cumbersome affair which all comes back to integrity and equity and, according to the USGA, Mickelson broke the rule for hitting a moving ball and was given a two stroke penalty under Rule 14/5.

Let’s get it out there than Mickelson did make a phone call to USGA chief executive Mike Davis, the gist of which is that if it was a disqualification matter then he would rather that was the sanction. He was assured the two-stroke penalty was all that would be applied.

The rights and wrongs of that decision don’t sit right, though; something seems amiss, and that something has to do with etiquette because, if you are to believe Mickelson, and we must, he intentionally hit a moving ball which meant he plainly intended to break a rule. Such an action goes against the entire spirit of the game.

In time, I wouldn’t be surprised if golf’s governing bodies – the USGA and the R&A – revisit Mickelson’s actions. Not to give him a different penalty but to change the rule, because it is apparent that, in the spirit of the game, it wasn’t envisaged (most certainly in a Major) that a player would intentionally hit a moving ball back towards the hole to avoid it going into a worse place. (Mickelson’s ball was set to roll off the green)!

Anyway, Mickelson wasn’t disqualified. He played the final round yesterday to huge cheers, start to finish, from his adoring fans. He shot a closing 69 for 16-over-par total of 296 to finish long before the leaders went on their merry way.

Mickelson’s post-round actions were to say very little. Asked if he had any regrets about Saturday’s incident, he replied:”I think the real question is what I’m going to do next. The answer is I don’t know.” Whatever that means . . .

On leaving the recorder’s hut, he spent almost an hour signing autographs for his fans who offered him belated happy birthdays (for his 48th on Saturday), and happy Father’s day and not mention of his actions on Saturday. They offered him flags, Donald Duck hats, caps, Shinnecock Hills flags and even a copy of his book, One Magical Sunday which recounted his breakthrough Majors win in the Masters. On and on he signed, taking numerous selfies and smiling and chatting with his supporters for whom he can do no wrong.