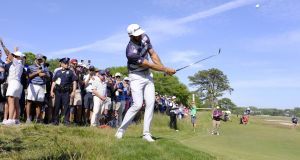 Dustin Johnson chips onto the sixth hole during the third round of the 118th US Open Championship at Shinnecock Hills Golf Club in Southampton, New York. Photo: Justin Lane/EPA

One of those G-U-B-U-esque sort of days at a US Open unfolded over the links terrain of Shinnecock Hills where the grotesque mingled with the unbelievable, all added with a touch of the bizarre and the unprecedented, to make for a concoction that was at times unpalatable and yet somehow impossible to resist.

Where this 118th edition of the old championship seemed set to be no more than a weekend coronation of Dustin Johnson, events on this expensive real estate on the tip of Long Island contrived to turn so called Moving Day into one of shifty manoeuvres and unlikely charges.

Daniel Berger and Tony Finau - who were like covert operatives stealing in when nobody was looking - started out 11 shots behind midway leader Johnson but the pair registered 66s (for three-over 213) and finished up in a four-way tie for the 54-lead, along with world number one Johnson and defending champion Brooks Koepka. Johnson stumbled to a 77, Koepka shot a 72.

And with Henrik Stenson claiming the course setup to be “silly . . . very much borderline if not over the edge,” and former British Open champion Zach Johnson adding his tuppence worth in suggesting, “We’re not on the edge. I thought we could be on the edge; but we’ve surpassed it,” the USGA was under enough fire for the setup without having to deal with a bizarre - unethical? - incident with Phil Mickelson, who intentionally swatted a moving ball on the 13th green.

Mickelson’s crusade towards some sort of golfing sainthood - on his 48th birthday, and serenaded onto greens by those massed in the grandstands - took a hit with an admittance that he intentionally hit the moving ball, an action which resulted in a two-shot penalty (breach of Rule 14-5) but not the sanction of disqualification as it wasn’t deemed to be a “serious” offence.

Andrew “Beef” Johnston, who was playing with Mickelson, suggested afterwards that the American had performed the action in a fit of pique but Mickelson himself claimed that he had done it on purpose, aware that it would result in a two shot penalty (he took eight strokes, including hitting the moving ball after his initial bogey putt ran by the hole, and then had a further two penalty strokes added).

“I’ve had multiple times where I wanted to do that. I just finally did it,” said Mickelson, who became a major character in the story of the third round even though he was (14 shots off the leaders) far removed from any involvement in the title’s ultimate destination.

For the first two rounds, Johnston had pulled the strings but, on a third day of competition, with flags in some difficult positions and the course firming up as the round progressed, the world number one struggled. Even before Johnson had set out, Berger and Finau were finished and had manoeuvred up the leaderboard into contention and, unbelievably, to share the lead by the end of the round.

A front nine of 41 strokes - with a double bogey and four bogeys - saw Johnson slip and stumble back to the chasers, yet he composed himself on the homeward run and had edged back into a one shot lead until a closing bogey for a 77 brought him back into a four-way tie.

The best 77 he’d ever shot? “Probably, yeah. For sure,” responded Johnson, adding: “It’s the US Open. It’s supposed to be tough. There was maybe only one or two flags that I felt like were maybe got a little dicey, but the rest of them were fine.”

Koepka, seeking to become the first player since Curtis Strange to successfully defend the title, remarked: “It was pretty tough from hole number one, starting. There was no break. I mean, you can’t lay off the gas pedal at all. You’ve just got to keep going, keep firing, play to your spots, play to the centre of the green . . . you start putting downhill, downwind, you’ve got no chance. But when it comes down to winning a US Open, you got to have some grit, some heart. I mean, I’ve won one, so why not win another?”

The quartet of Berger, Finau, Koepka and Johnson got to the same mark in quite different ways - two stealing in, the other two rolling up their sleeves and fighting a battle with an ever-firmer links - but head into the final round out of front, a shot ahead of Justin Rose who bogeyed his finishing hole and two clear of Stenson.